With Rob and Jeff out down Cussey Jon and I were given the task of dropping a big mine shaft that Rob had found on a dog walk. He sent us a video on the group chat of him chucking a big rock down the shaft and it sounded DEEP! I happily volunteered to go and drop this, and Jon was going to come along for the ride.

The mine in question is called Cackle Mackle Mine, we think, up on Longstone moor. It is covered by some huge wooden sleepers and pinned down with two metal rails. Looking at the photos I thought I would be able to pry the beams apart and loop a sling through but when we got there we quickly figured out that it would be impossible to move the beams even an inch, so new plan. Jon made quick work of digging out a wide enough hole so I would be able to slide under the beams, I noticed that a long girder had been placed under the wooden beams right in the middle of the shaft. We rigged a Y hang using two slings wrapped around the two side rails and I used this to get down underneath the beams. Once I was comfortably under I passed a sling around the girder and rigged off that, which let the rope hang perfectly smack bang down the middle of the shaft. I still could not see the bottom of this thing even with my torch on the brightest setting. So off I went down. 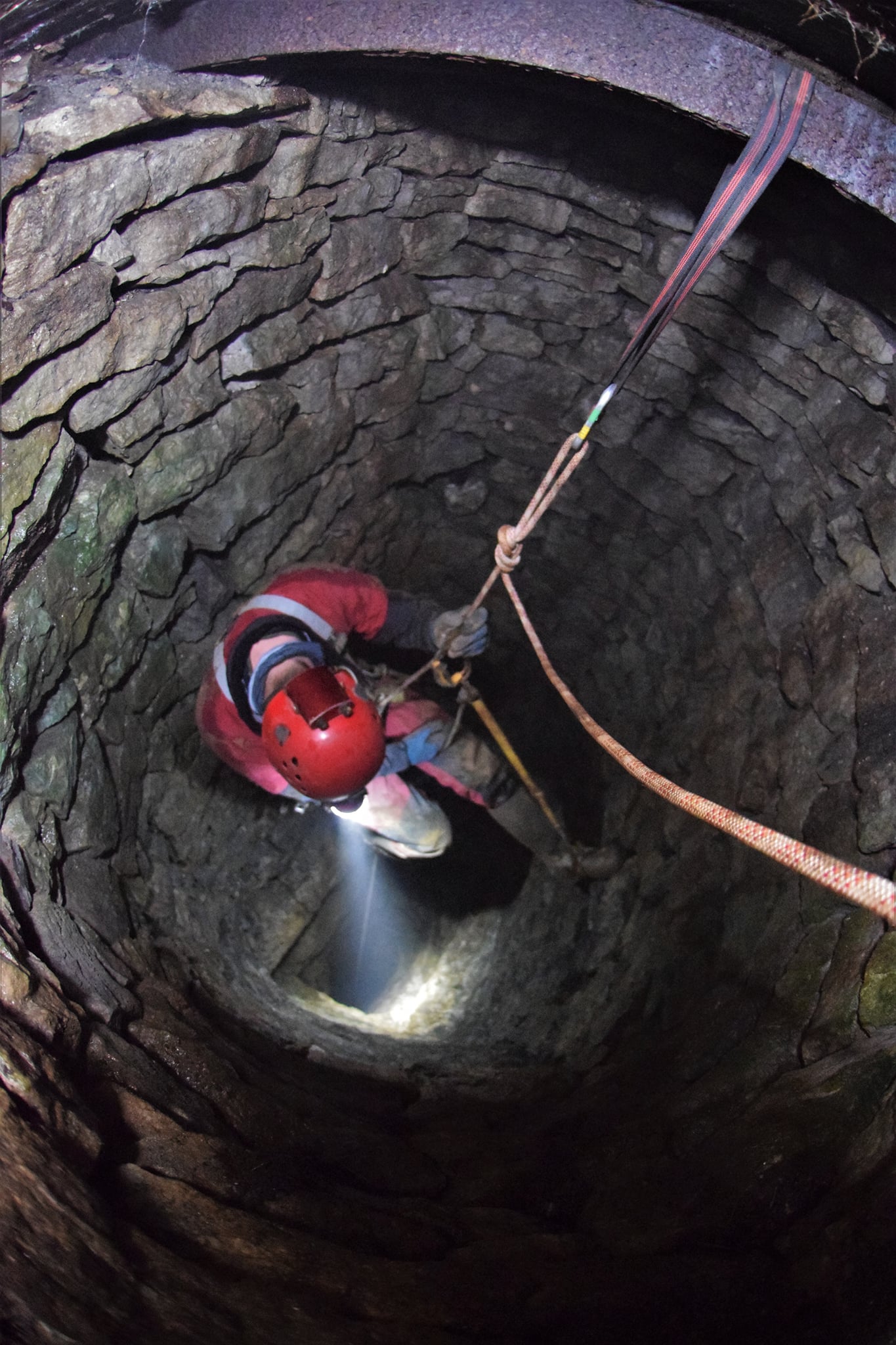 The first 5m is all ginged but after that it’s just all solid walled. Going off how much rope we used to rig and what was left at the bottom I’d say it is a 60m shaft. The floor of the shaft has had a lot of rubbish thrown down but a way on is down a small slope. it's mostly hands and knees crawling in the workings and it is like a rabbits warren down there, little side passages going off everywhere and looping around to join back in with the main workings, very easy to get disorientated. I pushed most of the passages which either end in solid wall or small collapses. Down one steep slope I was posted out into a walking size rift. The floor was very wet mud so this obviously takes on some water at points. I followed one way until it got to a crawl, by this point I was starting to get a bit lost and since my wing man, Jon wasn't going to come down, something about his suit not being clean, I got a bit worried so decided to head back out. Finally found my way back to the shaft and set off with the long prussic out. All in all, a cool mine. Found a chiselled date of 1856 on the wall down there. We plan on going back down and surveying it. Of course the entry hole was carefully backfilled to make it even safer than when we first found it. 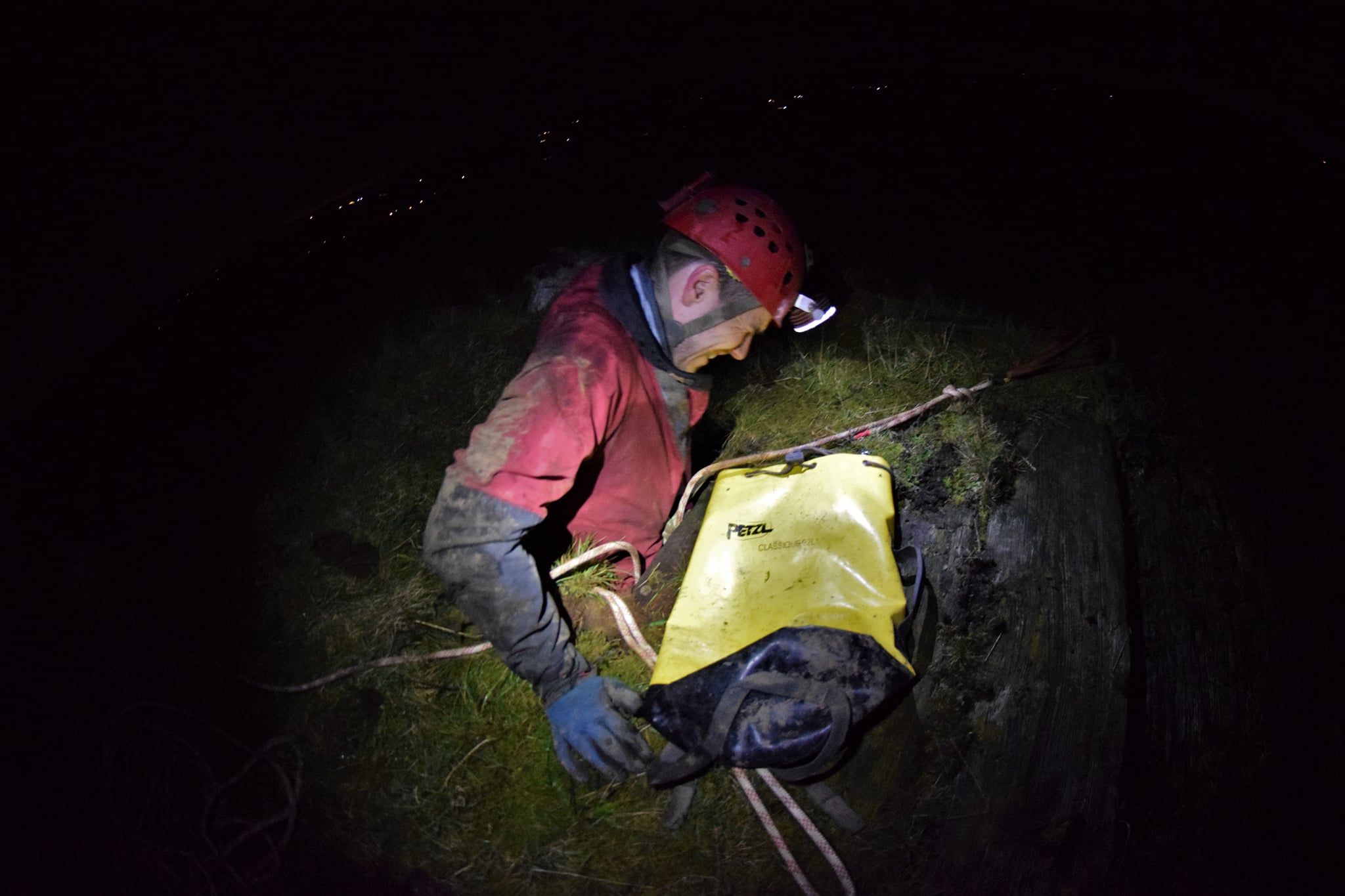 Luke struggling his way out, by JonP

Just Luke and I on his return trip after child birth. Easy trip tonight surveying this old mine in Cressbrook Dale. Fairly straight forward trip on a rather cold evening including the upward extensions we pushed a few weeks ago. Total trip 2.5hrs, with a brief look at the push at the end of the mine. It looks easily passable albeit a bit tight around the rotten stemples which should be passed with extreme caution. Plans are made to return another time to explore and dig through this section.

Only Jeff and I tonight so rather than not doing much down IDM we thought we'd not do much down Waterfall Hole instead! Jeff had never been down in his extensive caving career and I'd not been down for years. We had our normal pre-beer and could hear the Waterfall pounding down in the shake-hole, it had rained all day but the clouds had now moved on leaving a crisp, cold, clear night.

We headed underground around 8pm (late for us), the shake hole was still backed up with water but appeared to be going down rather than coming up. The entrance crawl was pretty grim as was Wardwins Crawl but not a rank as my memory served. We SRT'd down Hockenhulls Rift and got lost straight away. Our main aim was to get to Waterfall chamber and check out Great Gunns Rift then head down to EPS aven. We succeeded in the first aim after some novelty route finding efforts but I couldn't for the life of me find the way down to EPS Aven. Water was still high in the cave which restricted us from entering certain parts/voids. After an hour or so's pottering we decided to head out and vowed to return in slightly dryer conditions for a proper good look.

It's certainly an unusual place and as the late, great John Beck wrote in an old TSG journal, The cave is in a constant state of change and one day some keen (or lucky) explorer will eventually find (or stumble) across the continuation which must lay below.