A Team Awesome away day!

With me fleeing the country in the not too far future we decided to organise a Team Awesome away weekend to get us away from the grit of Derbyshire exploration. Hummin' and Arrrrin' about what trips to do we eventually settle for Ireby Fell Cavern and the Cripple Creek round trip. Dave Gledhill had told me about this trp years ago, not too long after the connection had been completed and said it was a right bugger of a trip which sounded like fun to me.

We made the journey up t' Dales on Saturday morning and stopped for a quick bite to eat at Inglesport before making our way over to Masongill. Not wanting to use loads of rope and kinda hoping Ireby is always rigged (right?) we took the basics and headed up the hill for what would be Luke's Yorkshire Dale Caving debut. Entrance finding was not a problem and we were soon slithering down the entrance tube to the top of the entrance pitches (which were not rigged - FYI). Luke made a fantastic job rigging these pitches (inc. deviation) and we were soon bimbling along down the Upper Main Streamway passing the duck which was fairly low. On reachin Well pitch we found a rope so we had a dilema of either dragging a 30m rope through Cripple Creek or completing the round trip and walking back down to collect it from the top of the pitch which'd take roughly 20min. We decided on the first option and took our rope along for the trip.

Quick progress along the Lower Streamway and we were soon admiring Duke Street and how great it must have felt to discover this passage back in the day. We progressed forward until we reached a short rope hanging down from the roof. This Leads up to Skylight Passage and the other bypass to the Duke Street sump (let it be known as the much easier of the two bypasses). We had a quick bite to eat and set of up the rope and made swift progress along the crawl. This pops you out in the connection of Whirlpool crawl in Ireby II which was connected in December 2008. It's worth mentioning here that the Cripple Creek connection was created in February 2008 which meant a good 9 months of bastard long trips through Cripple Creek to dig the other side. The passage drops you down a climb into a passage which lead NE to the sump which connects to Notts Pot. SW takes you to the rather impressive Duke Street II. We followed this until a passage snakes off on your left to a series of pitches. It was from here where Dave G's description started... 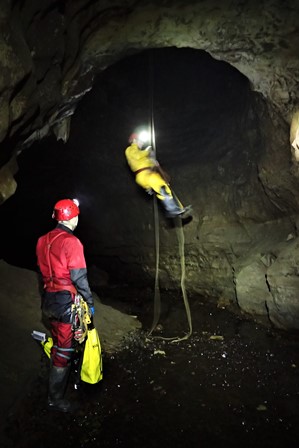 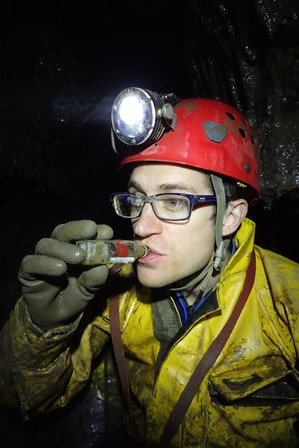 His description sounded pretty vague and basically said just follow yer nose and if its not tight and squalid you've gone wrong! YUP... So we headed up the ropes and eventually found Jupiter Cavern (4x ropes up). From here stick right and traverse over a large hole in the floor (traverse line on right) from here a rope ladder climbs you up into a rift passage leading to a squeeze, after this the Cripple Creek connection is found by dropping down into a tight rift and then follow ye nose. Rob pushed through first a soon shouted back that it might not be the right way as it's pretty small! He squeezed through and shouted us to follow. The initial breakthrough squeeze is a short section of passage 2m long and approaced from this end its a 45% upward incline with gravity against you. I managed to sneak a quick picture of Luke here. 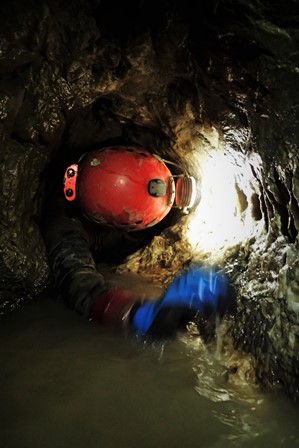 From here on we did just follow our noses up and down many a rope ladders and through some lovely awkward squeezes at roof level. We approached Numpty Rift in the same manner as everyone else and manouvered this at roof level with much struggle. When we finally arrived at Ramsays Kitchen (the only major junction to date) we were completely screwed! Dave had forgot to mention a prominent junction in his discription... We headed left knowing that's where we roughly needed to be heading to an aven with another ladder hanging down. We had all looked at the survey in Inglesport that morning and knew that there was only one junction not far after Cripple Creek (Ramsays Kitchen) and the next left would be our left to exit the cave. Now fully aware of how little we had moved up this passage and pretty exhausted we continued right along Turtle passage which conveniently someone had placed a small model Turtle only a bit of the way down. Once we saw this we knew we were on track and quite relieved as the thought of heading back through Cripple Creek was pretty grim.

We finally ended up back at the Upper Main Streamway Just below Pussy Pitch dead excited that we had managed to negotiate our way back here! We celebrated with some food and young Luke scoffed down 3x Wispa bars! We had picked up a large ULSA team at this point and made clear that we'd like to exit before this party - which we did. De-rigging was uneventful bar the idiot below me blowing my mind with sea shanty's! Once on surface we made our way back to Rob's motor in the dark. FYI it was freezing. Ready for a beer. 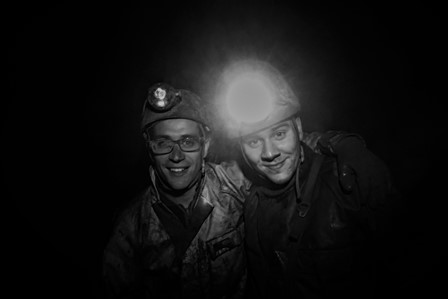 Team Twosome as it were with Luke bailing on us we decided to check out a lead which on paper sounded enticing. A possible continuation of a tube in the far end of Sidetrack Cave beyond the Flat Out Walk where we believe only a few people have proably been since discovery back in Sept 2002!

Rob and I wasted zero time (except for 20mins trying and succeeding in putting too small wellies on) dropping the quarry bench and quickly de-kitting to face the crawl that is The Escape Route. This seemed to pass fairly quickly to my surprise. Much quicker than when Luke and I had ventured down a few weeks ago maybe due to Luke's constant moaning... We reached the Litton Stroll and had a quick check around th area already knowing a possible connection with the passage beyond the Flat Out Walk. We noted a couple of places and progressed LEFT at the junction and ducked down LEFT again and crawled through the duck which was AWESOME! A passage on the right seems to take a good draught inwards and we continued forward to reach the Y - junction. From here we took the RIGHT branch which continues through some blockages at the base of small avens to eventually reach a small chamber with boulders everywhere from when the original explorers broke through.

Moose had described the next section well... A rift passage snakes off from here which requires a bendy back and would be perfect ig you were shaped like a Loch Ness Monster... (I dismissed this at first but it is actually a pretty bomber description) Once this passage has been negotiated it reaches the base of a 12m aven. The tube continues at floor level bit is heavily silted up. Rob climbed the aven and discover 6m of passage heading off at the top but no ways on. The draught seems to head up the aven. We returned back to the Y - junction and headed LEFT to where the passage silted up. Rob waited here whilst I headed back to the Litton Stroll - Escape Route junction to test for a vocal connection which was very clear band opposited the junction in a little hole dug out behind a large boulder in scree. 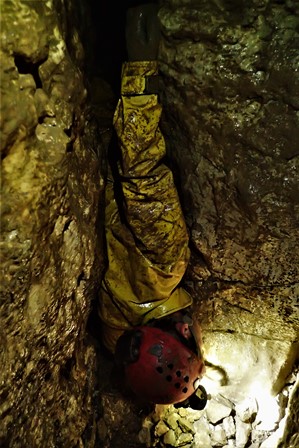 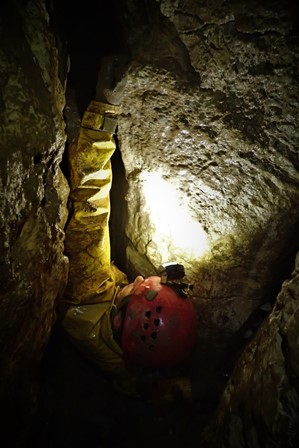 Once Rob had passed back through the duck we wasted little time in retreating to surface which was bloody freezing! We met our fellow Awesome team member at the Anchor for refreshments afterward.

Team Awesome assembled at the usual car park and after searching deep for some much needed psyche we kitted up and made our way over to Boxing Day Swallet. Skirting the river we eventually stumbled upon what we believed was the old way in to Sneshigh Swallet. We knew from COPD that the water had been diverted from this swallet in the 80's in to Boxing Day swallet so continued to follow the water downstream where we eventually met a large rotten lid where Rob could hear a waterfall - BINGO!

The guidebook marks this pothole with a massive warning about it being flood prone and anything but un-settled weather would be threatening. Having rained for the past two hours we though we'd at least find the cave and check out the old sump.

We had a couple of short lengths or rope, a few krabs, a few bolts, a sling and a spanner. I kitted up on surface and foolishly forgot to attach my chest harness and croll not realising until reaching the first pitch - Doh! We all clambered down the entrance climb which was an easy but exposed groove in the corner of the shaft. From here a small section of passage and a climb down leads to the original sump which is now a crawl through water which leads to 30m of awkward tiny 'Crabwalk' type passage to the head of the first pitch (8m) which is conveniently followed by the second pitch (10m). All of the pitches require bolts for spits, we could tell nobody had descended recently as the deviation chord on the first pitch was nicely calcited over but still usable. From the second pitch we took the dry traverse option (3m down) and kept away from the water. This led to an impressive part of cave, much like a typical Yorkshire pothole, clean, wet and dark everywhere... 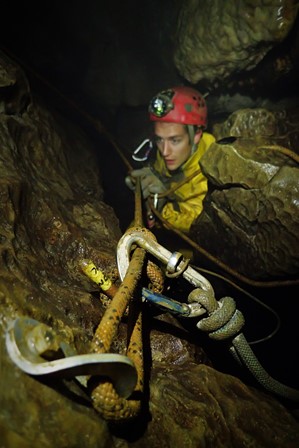 Rob at the top of the first pitch 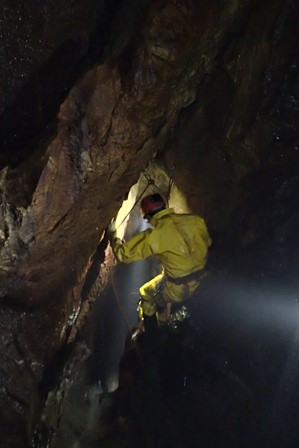 Rob about to rig the second pitch/traverse 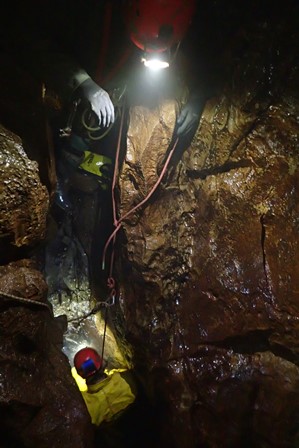 We dropped a further pitch (9m) and a further climb (2m) back under the pitch to the start of the start of the Blasted Ochre Rift (4m) in length where a small Ochre coloured inlet comes in from above. The passage now descends steeply to a small pool which flows over the fourth pitch (8m) but having run out of rope, bolts and krabs we had to turn around at this point and leave completion till the next visit. That being said we could've possibly seen the bottom sump pool from the pitch head marking the end of the cave.

We headed out with no issues. Luke feeling glad to have escaped with his life once again on another fabulous trip strung together by Team Awesome. We caught up with a shandy at The Anchor afterward for the monthly meet.