As cave explorers, we often find ourselves traveling around the world chasing the opportunity to discover places never seen before. It's therefore a refreshing change to kit up at your own house and set off into the back fields in search of an adventure. 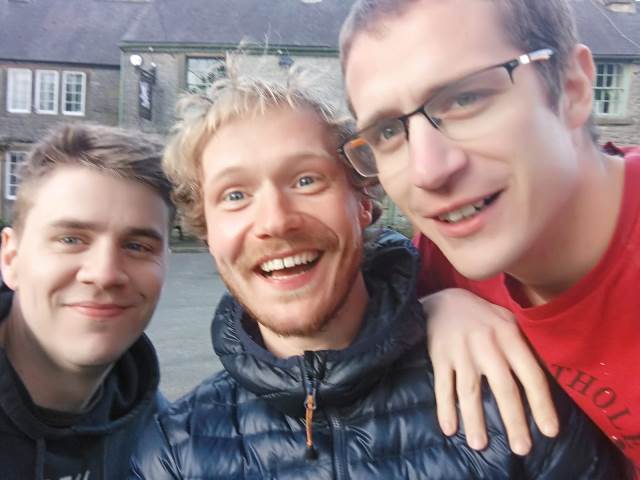 Pre-pints were supped in't Red'n then we headed along the dale to a draughty hole which Rob had found a few months ago during the Beast from the East... It looked to be beyond the point of the shaft found in TDM and could link things up nicely.

Enjoying the walk over discussing news and politics...

Rigging off naturals we descended pretty quickly using our "Expo" rigging methods of zero rigging and a left handed bowline, avoiding rub-points as we could. 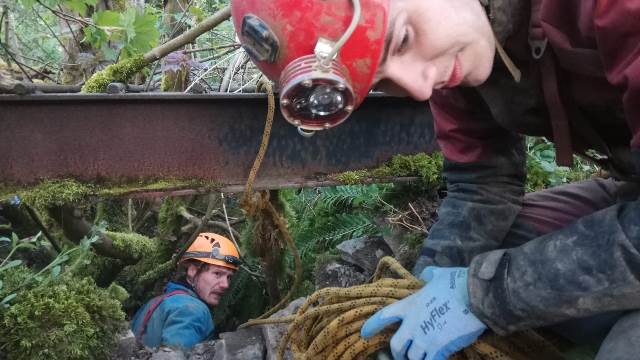 What knot is this? 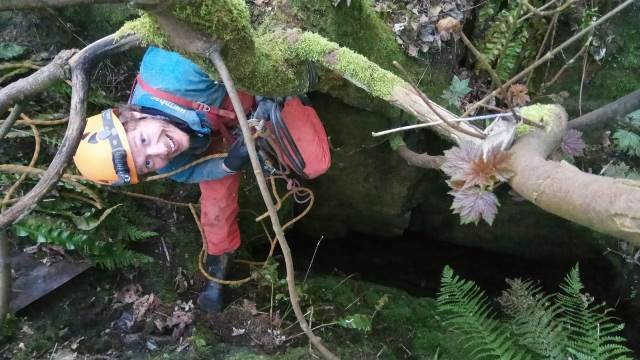 Hanging about on a tree

I almost made it to the bottom via these rigging methods but whimped out when the rope would hang over a wall of miners deads! - Luke to the rescue, He abseiled down to place the first bolt above my head which left the bottom of the rope a metre or so from the floor but bomber as far as risk assessments go. We scouted around quickly admiring the miners cart axle and thousands of bones - don't tell anyone...

Rob surveyed down whilst Luke dug through a collapse to gain access to a further pitch... 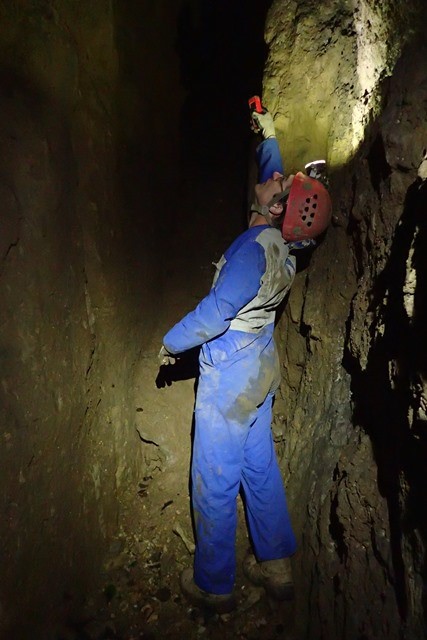 Rob surveying up to daylight 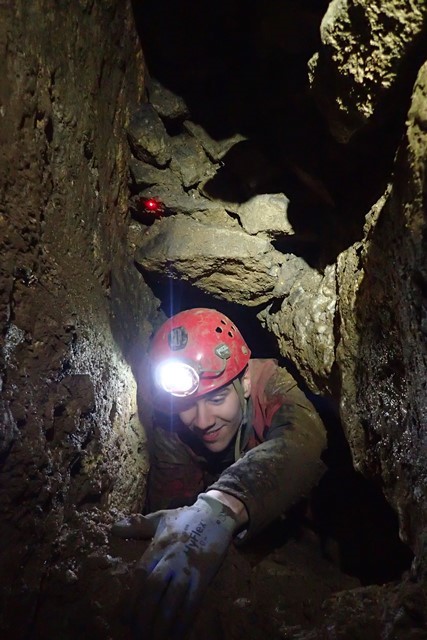 Luke digging through the collapse 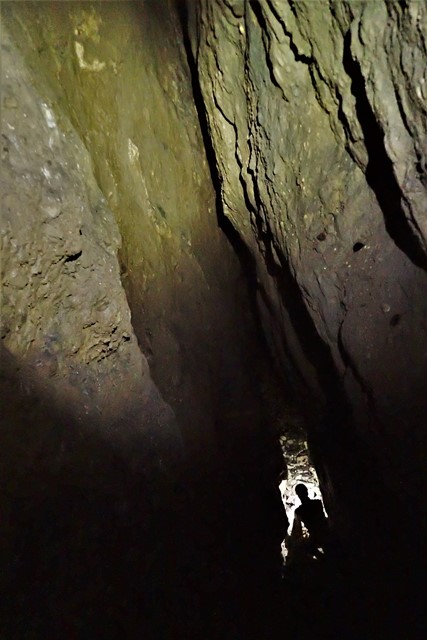 Rob bolted the freshly discovered 6m pitch but with no rope and it looking pretty negative in terms of finding a connection of any sort we started our retreat. What we did notice on the wall of the pitch was a large rope groove from hauling ore out of the mine. 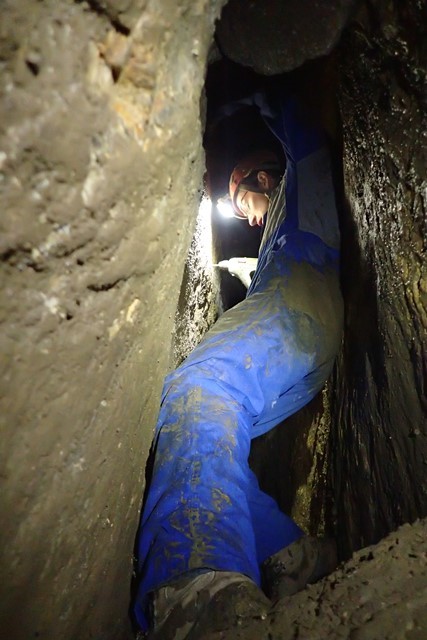 Getting out was a bit tricky due to the loose nature of the place. Luckily nobody died. 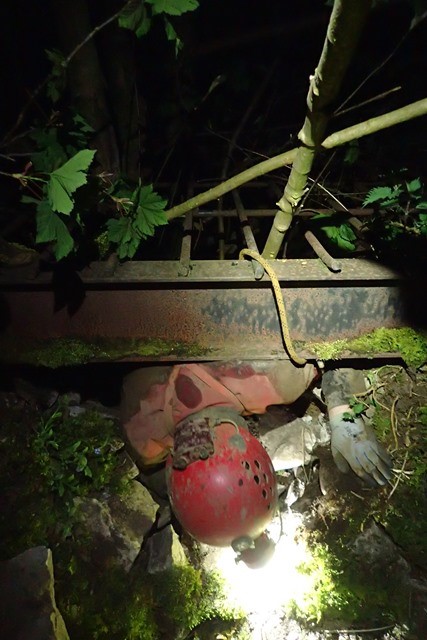 Luke squeezing through the entrance

We made it out with just enough time for a beer and pub snacks with a plan to return to drop the 6m pitch minus a Jon.

Last trip’s delights ending at the base of a draughting climb up, pushed expectations for this trip enticingly high.

Just me and Luke again, so we went straight for the end. assessed the best climbing approach. As this rift is very slanted, I suggested the lazy option of simply climbing up it quickly and frantically, just with a hauling rope attached to allow rigging a rope from the top once/if made. Luke was happy for me to do this. In retrospect this was an excellent choice as the danger of the loose material is made no worse by climbing it on rope, probably the opposite.

At the top the excitement waned quickly as the level each way quickly ended. Right (west) at a boulder/mud fill and left (east) at a solid wall after 7m. Just before the end is a ginged shaft down which looks blocked at the bottom. I rigged some stainless bolts and Luke came up and had a 10 minute dig at the choke, but it doesn’t look positive. Although we did notice that this level had been blasted from the other way, so it must go somewhere….

The perplexing thing is that neither of the ways off draughted, the air was very still up there. Admittedly the weather on the surface was not as extreme as last trip, but even today at the bottom of the climb was a noticeable draught. So it seems that this might be continuing straight on into a rubble collapse, and not heading up the climb as previously thought. The dig ahead looks loose and dodgy, but it’s certainly worth a quick go if indeed the draught is going that way….

It didn't take long to remove the few stones from the entrance and to dig a little hole through the snow drift inside to reach the stooping height passage heading off into the hill. No-one had been here for years, but away from the cold, blustery weather outside it feels warm and homely, even in just my thin cotton boilersuit. A short 20m stoop following the huge draft led to the bottom of a shaft up. I was alone so not a good time to start freeclimbing up the shaft, and anyway it almost certainly heads straight up to the surface.

"Well, that explains the draught", i thought as i see the air rising up, carrying my breath with it. However the stooping passage continued and to my big surprise it also took some of the draught. Another 20m in I reach the abrupt pitch head i was anticipating from a vague description i read of the place years ago.

"The level continues to a shaft in the floor, 120ft deep to some very unstable workings"

Knowing that there must be a route up to the surface here somewhere i was amazed to see a totally flat roof, with no way on other than straight down the pitch. A quick breath check confirmed that the draught is indeed going down, which means it must eventually find its way up to the top of the hill!

I left about as excited as i get, knowing that a new project may just have been borne...

After last week’s solo rece, I was convinced we’d have plenty to do on this trip. Changing conditions were awful so we got underground in a rush. At the pitch head the absence of a drill bit started a distribution of labour discussion, which both sides probably think they lost. I stayed, calibrated the distoX and surveyed the entrance level alone, whilst Luke went and got lost on the surface trying to find the car with the drill bit inside.

Once regrouped, Luke did an efficient job of bolting down the shaft. 4m above the flooded bottom the shaft bells out to reveal two ways on. A shout up “You’re gunna like this” got my toes tingling even more than the SRT harness and before we knew it we were scrambling between blocks that would be the “safe ones” in HOG Mine. A hading level heads west, through large calcite vugs and sketchy roofs. An immature end gives only a small hole too scary for Luke.

On the way, two holes up were noted. We took the one taking the biggest draught, a sketchy 60deg slope up passes a potentially natural pocket and lots of flowstone. Luke’s smile at the start of the level at the top spoilt the surprise, as we then tiptoed our way in awe along a white calcite stream, full of delicate pearls and crystals. The miners abandoned this place, never to be seen again. The hill filled it with beauty, and here we were seeing it for the first time.

After 40m another shaft up which requires bolt climbing ignited our pub alarm. 15 minutes back to the surface felt far too little from the delights we just unearthed. More to come...?