Only Luke and I for this one. We met up at Titan quite early (9:30) and quickly got kitted up in freezing conditions and headed over to the entrance shaft. Luke made a complete faff unlocking the lid whilst I gawped, face slightly frozen. Soon after we quickly bobbed down the entrance shaft as the place was already rigged (thanks SUSS) quickly followed by the first pitch to the Event Horizon ledge. I've had not been down here for years so was quite nice to drop a decent pot for a change.

After the traverse over to the Streamway proper Luke de-kitted, my response being how much cave do we see to the pitch and whats at the top? He said there weren't much but I knew Rob would only have a go at us if at least one of us didn't head up the pitch for a look. We bimbled up the Streamway cleaning our kit en' route which is always a bonus. Finally getting to a crawly junction which was where I had turned around before some years ago. We headed right through a hands and knees crawl to a rather wet flat out crawl in water... This continues to reach a sump with a way up on the right. I shouted back to Luke, "Does it sump?" And after some blurted mumbles turns out that we had gone the wrong way - YAY!

A little further back we had missed an obvious right turn up a muddy passage which leads to a step up following the right wall. This leads to an impressive chamber with a sketchy knotted rope climb in the far corner. Once up this you follow your nose to a junction. Left eventually leads to Rob & Co. shored boulder choke. I had to agree with Luke on the sketchy scaff but it does the job so i'll stop complaining - not that I could've done better myself. The climb up through the choke is probably 1.5-2 body lengths to pop out in a rather impressive chamber! A clamber up back on yourself leads to absolution which is rather pretty whils various ways lead on from this complext chamber they all close down which leaves you with a rope hanging down from the roof.

This rope takes you up to The Crows Nest from where a crawling passage leads off through delicate formations also containing a stream. I reached a point where I'd have to take my SRT kit off to push a squeeze at floor level in water and thought 'Nah!' and headed back to rejoin my fellow Awesome caving colleague who was sat waiting at the bottom of the rope with his lamp switched off. We stumbled out from here, I fell down one of the bigger cascades, making our way back to surface 2hr 30min after descending.

On surface we pretty much legged it back over to our motors and made our way t' Anchor for a swift un after getting laughed at by some bikers whilst attempting to get changed up on the Titan track.

This is an Awesome shorter trip in the Peak and obviously should get a lot more travel than it does. 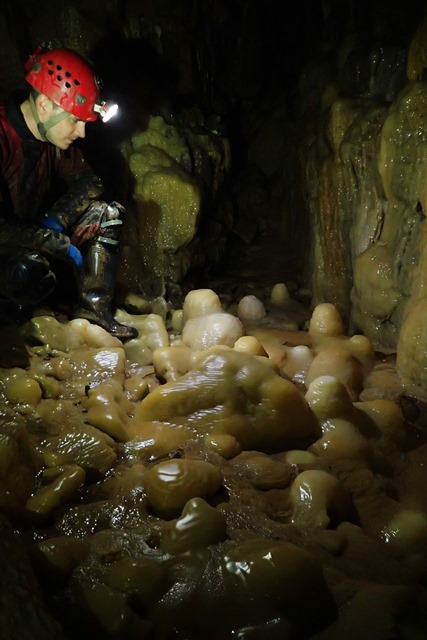