A few fields somewhere between Peak and Eldon, there's gotta be a lot of cave under there somewhere!

Following our successful Kittens trip, we returned to Watts Grove to explore the levels heading off halfway down the main shaft. A sketchy traverse protected by a couple bolts saw us into the first and whilst the echo along it sounded awesome the presence of an old 8mm spit took the edge off our excitement. The level is a classic example of T’owd man’s hard graft, hand-picked and arrow straight, and now it’s additionally been adorned with a beautiful white river and pearls. Unfortunately it’s also prime evidence of poor judgement as it end blind after 40m with no ore extracted. 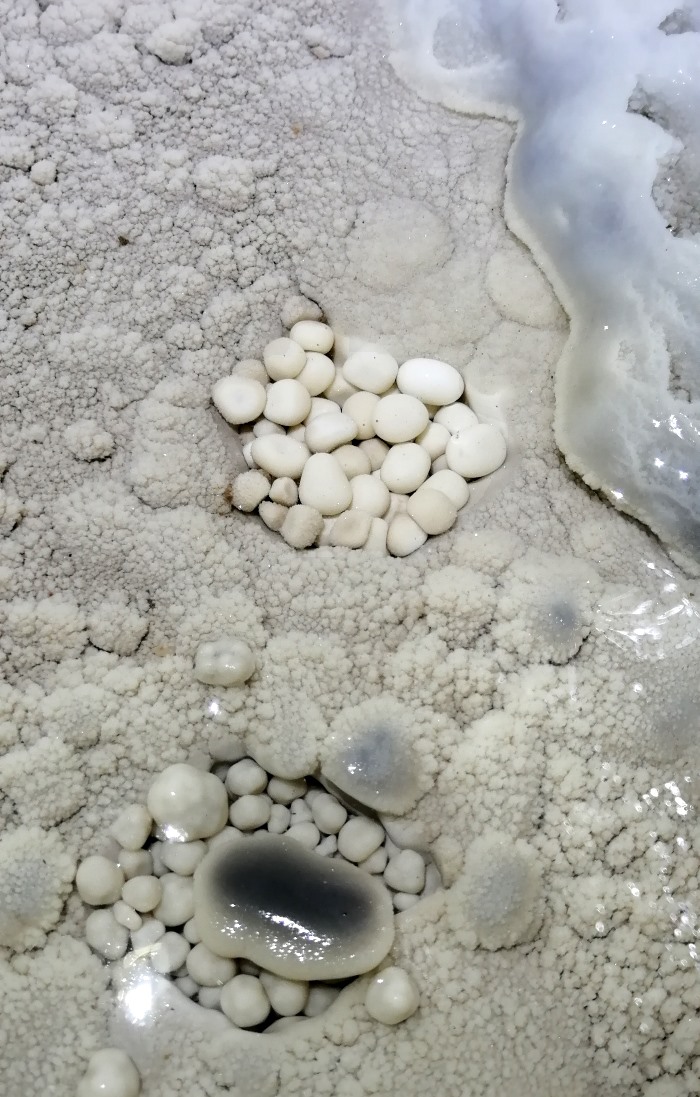 As I derigged the traverse Luke swung into the opposing level to report back it goes but the floor’s mostly missing. Indeed quite a bit of exposed thrutching was required to progress between the short sections of remaining floor, this time with no old spits or footprints so we were hopeful this would be new. Unfortunately once fully across it was clear they had climbed up from below to access the end, missing out the fun of the flying bridges. From here a short bit more level ends in the expected climbing shaft down, which marries up with the one found at the end of the last trip in the level below. Nothing continued across which was a shame as it marked the end of explorations in what otherwise had been an awesome little mine. We finished the survey and got some snaps, then smashed our way to the pub to come up with a new plan for next week… 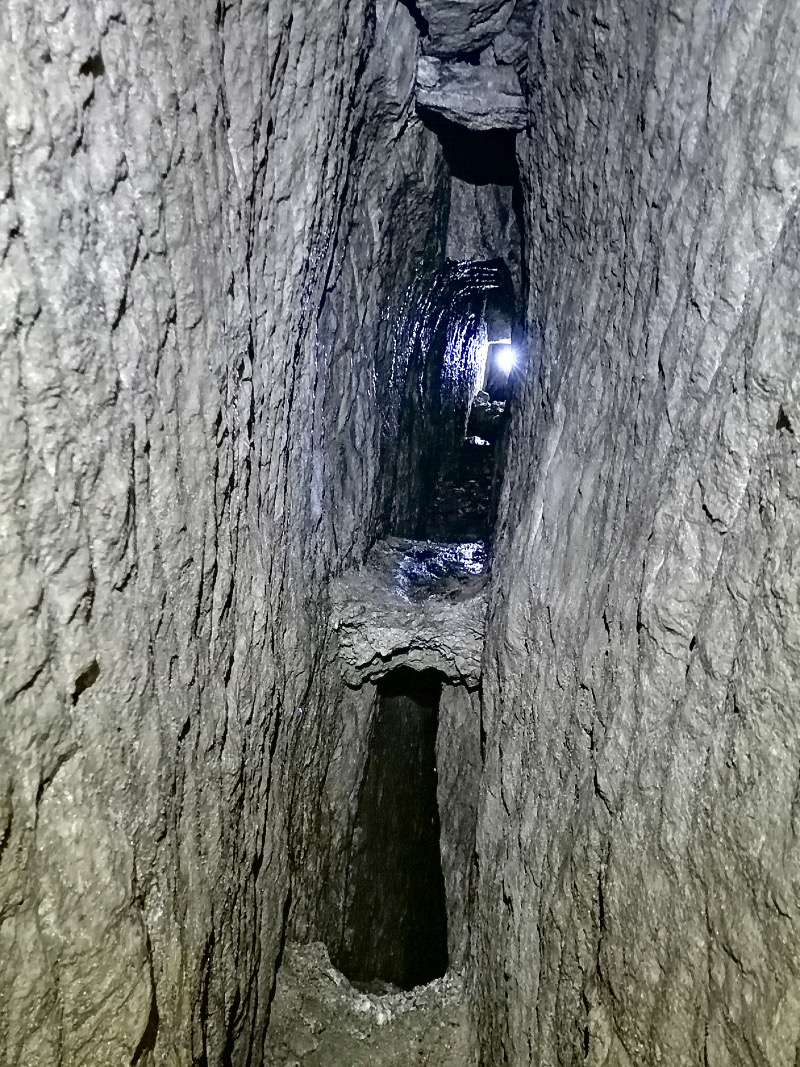 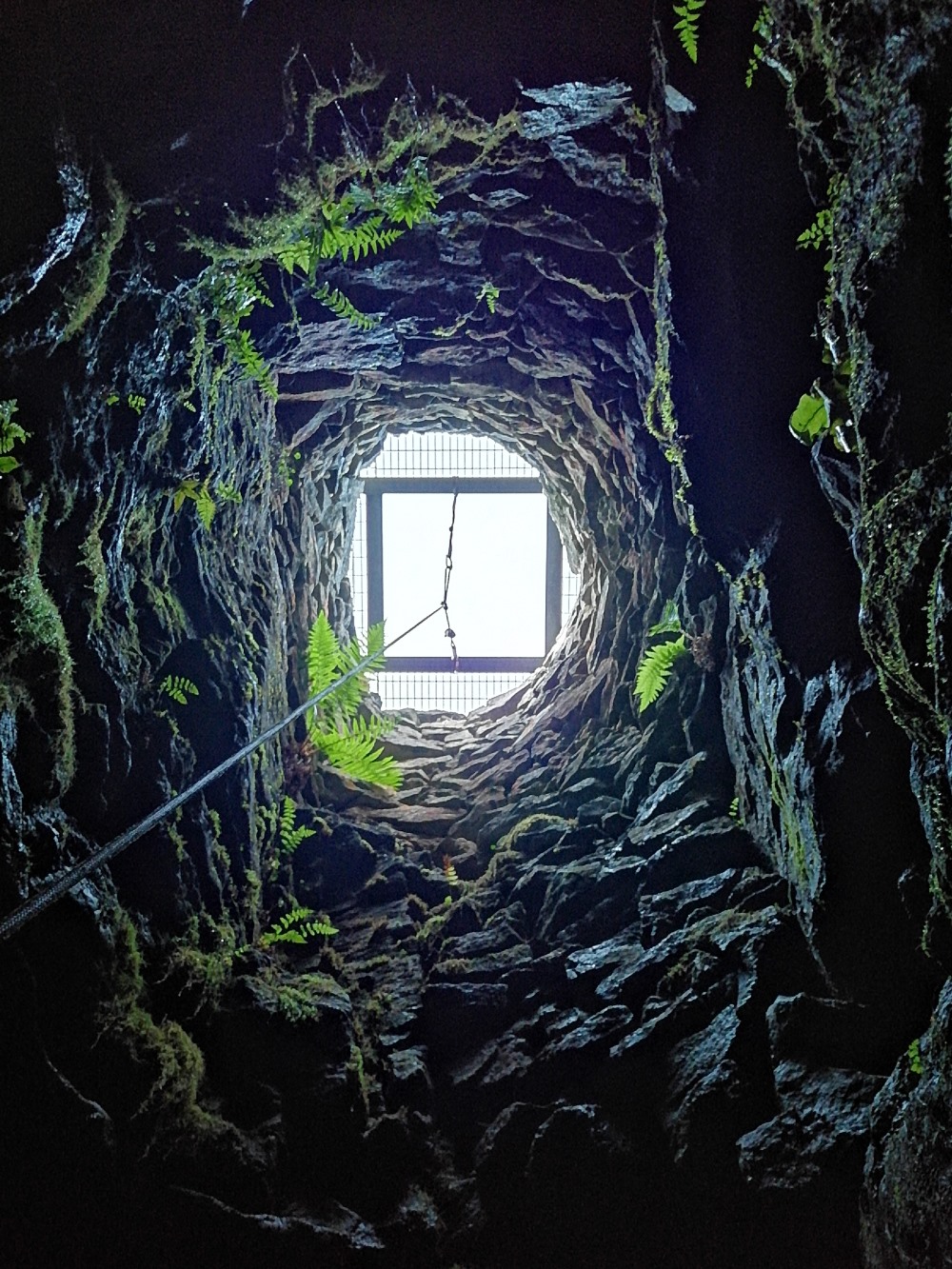 Following in Jeff’s relatively excited footsteps, Luke dropped down this shaft with moderate expectations. Once about 30m down the hollers up indicated it might be even better than hoped. Sure enough the mined shaft drops into a large natural cavity which continues for the next ~25m to a spacious rubble floor. Whilst no natural passages obviously lead off, two mined levels head into the vein which will need bolt climbing across into another time. At the bottom a very loose slope leads down into level with a series of small pitches up and down which we bolted as we went, following the occasional spit showing modern explorers had ventured this way previously.

When it got a bit dodgy we decided to start surveying, along a silly climb across the top of the last pitch through hanging death and into a previously unreached continuation into a small set of workings. Here the white rocks glimmered pink but shattered when touched! A way too dodgy climb up a collapsed climber gained access into a worked out vein with a muddy terminal collapse at the end which hopefully we’ll find a way around someday, maybe. The climb back down was worse but I somehow survived and soon we were back at the bottom of the entrance pitch. We cheekly decided to call the level "Kittens," after what French Jeff would have been having had he been with us!

Luke started jamming out just as I remembered we’d forgotten to survey back from the last pitch (like idiots) so I rushed off to get some data. In doing so I spotted a huge climber in the roof we’d somehow missed (like idiots) but we’ll have to come back to another day, as I’m not stupid enough to freeclimb up a 16m climber alone. Maybe one of the levels above will bypass it. We surveyed back to the surface and realised there may still yet be a chance to make pub so we derigged sharpish and sweated our way back to car and successfully to The Star. Awesome...

Work was manic for me so the lads got started without me holding them back. By the time I’d legged it across the hill French Jeff was already abb’in down the deep shaft, admiring the unusually good state of the ginging, whilst Luke was standing miserably in the rain having forgotten his oversuit. 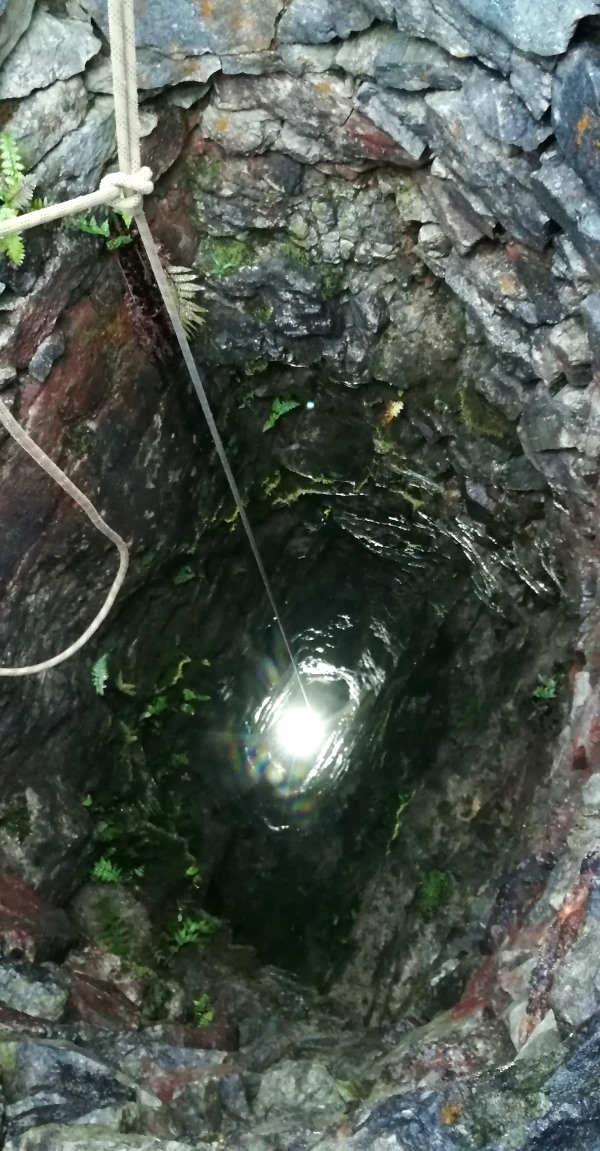 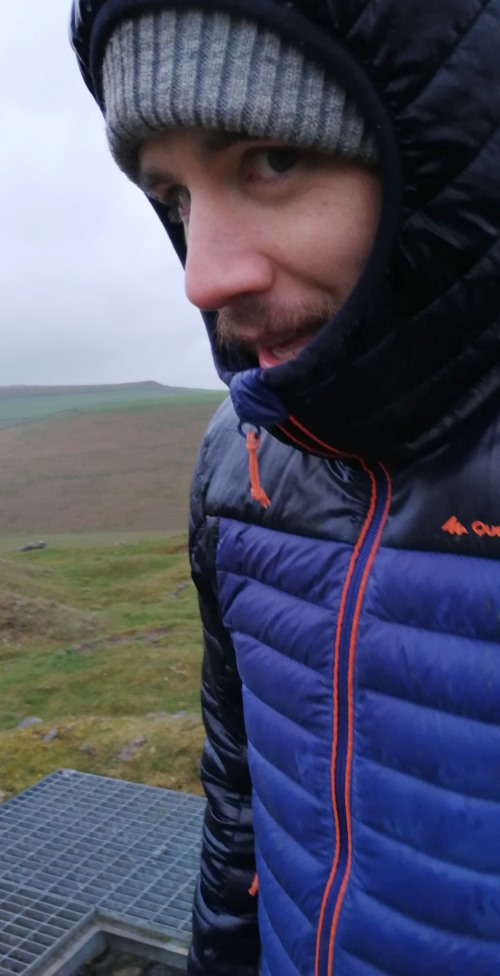 Meanwhile I got a message from Moose to give a nearby farmer a call as they’d lost a calf down an unknown shaft. Turns out to be a hole only 2 mins walk from where we’d parked, so I left French and Luke to it whilst I ran back to the car and go searching for the animal. Mum cow made it easy to find and whilst only a small hole for sure it was going to be hard to lift it out by hand!

Fortunately DCRO had already got a call from the farmer and were on their way. With plenty of impressively clean kit and well verse techniques they extracted the animal easily, whilst me n the lads (who had returned quickly after running out of rope) judged their slick methods, took photos and discussed the return trip what the major find Jeff reported…

A week had passed since Rob and I had found the huge open entrance to Jowle Grove mine and to say I was excited to drop this thing was an understatement! We had found out a bit of information on this mine but not much, we did however find that another group of local explorers had this place in their sights. They had been to the mine, faffed around taking the bolted lid off, but then only lowered a camera down there! Unlike them we don't faff around so we were armed with spanners, slings and some rope. The lid wasn't that easy to remove and we thought it was going to be over before it had even started but Jeff came to the rescue with his little spanner which manged to fit in the tight gap of the grate. Jeff proving once again that small tools can still have an impact, a motto of his life apparently.

I rigged a Y hang over the entrance which was a little fun to get on with the shaft being so large you have to lower yourself down with not much to hold onto or put your feet anywhere. Rob had run off to look at a possible cave that had just opened up on Eldon Hill somewhere, passed onto us by Mark Noble. See the Eldon Facebook group to see the outcome of that.

I went down the mine shaft first and just wow it really is impressive! The first 20m is a well built shaft, almost perfectly round with a nice wall. Some serious work had gone into this place. After 20m or so you come to some solid walls. Here it starts getting a bit strange. The miners had dug 2 levels going off but they soon shot off up, heading back to the surface. They then had built a drystone wall blocking of the shafts but left some solid rock in the middle. Looks awesome!

I carried on down and soon hit a blocked floor. We think this would have carried on down but it would be a hell of a project to dig this down any further now. I headed off out taking my time and having a good look around. Jeff was feeling a bit worse for wear after a night of being a naughty boy, I don't think he was that keen on heading down to just see a blocked floor but I talked him round and he headed down, you could hear him get excited as he slowly went down. Rob had re-joined us by this point and took some photos. Jeff headed back up and showed Rob how not to get off the rope. The pub was calling but I said to Rob he needed to go down, so he headed off down and I think he was glad he did. He took some awesome photos on his phone whilst he was down there which really do show just how cool this place is.

Once back on the surface we quickly re-fitted the lid and made a hasty retreat to the car before it started absolutely peeing it down. Headed to the Anchor for a well deserved pint and the monthly Eldon meet. Next week's plan is to drop another grated shaft a bit further down the hill called Watts Grove mine. If this is half as interesting Jowle Grove mine then it should be a good trip and would make an excellent evening sport trip, dropping both shafts. Fingers crossed!

Back in mid Feb we dropped a shaft (which may well be called Wham Engine shaft) which had a good draught out in cold weather. The three of us returned fully equipped, including Jeff’s weird oversocks.

Rather than deal with the horrific entrance section we smashed straight to the traverse and I rigged a rope across. Luke came across whilst Jeff stayed the other side in case something really bad happened. Me n Luke dug out the floor where the small hole was to reveal a relatively neatly ginged shaft heading down between the railway lines. Luke’s an idiot so he went down for a look. 6m down a load of big rocks blocked the way, the draught presumably sneaking up through them from caverns below. At that point rocks started spitting down on Luke so he made a frantic rush to the top before it all collapsed in on him whilst I offered moral support from the top. 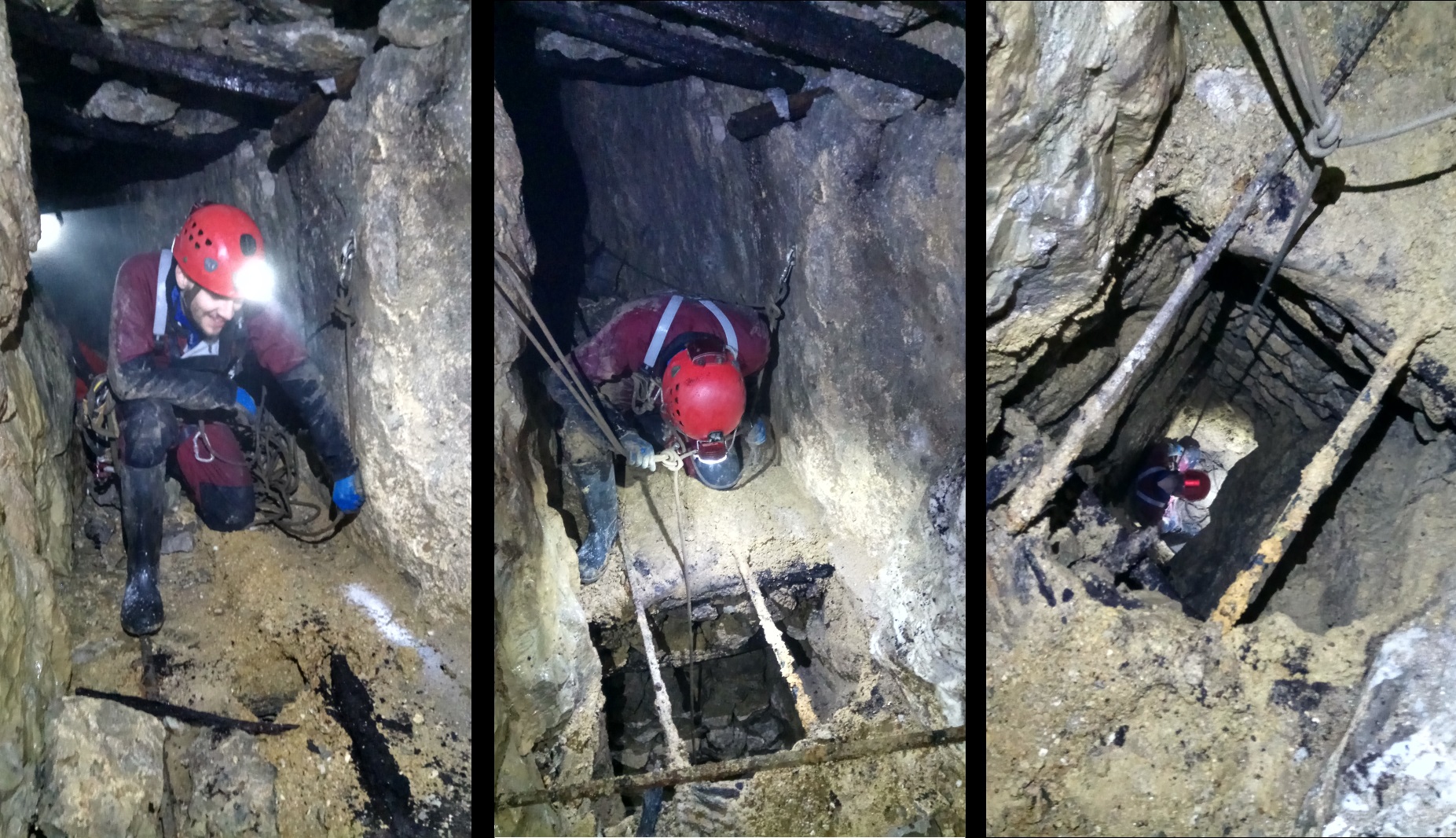 We then went for a look at the end of the Gate, which I remembered being horrific when there previously on my own. Again Luke’s idiocrasy came in useful as he simply dug his way up the rubble slope of death to gain access to an open room. There was unfortunately no way on, although there was a strange tube in the ginging of the far wall which has us perplexed for now. 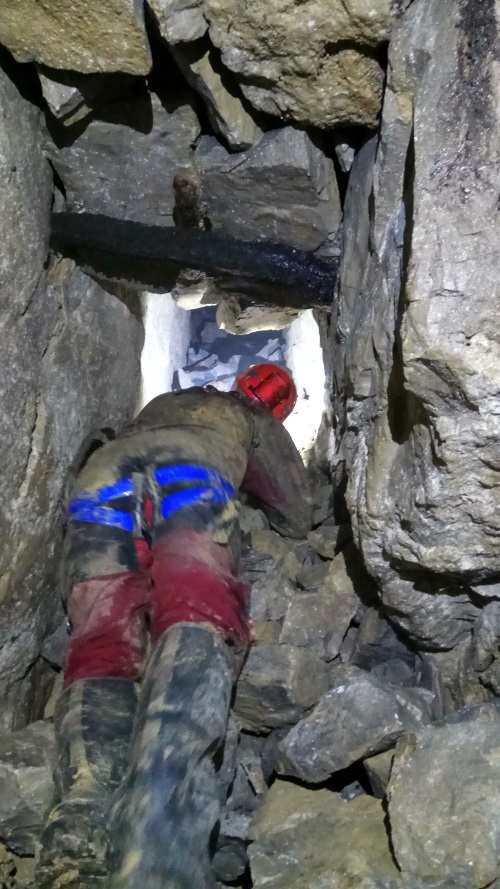 Luke carefully made his way back down the slope and we derigged back to Jeff and out. On the way we passed an old cart which looked remarkably like one I saw in Hazard Mine back in 2007, which is only 190m away along the same vein. 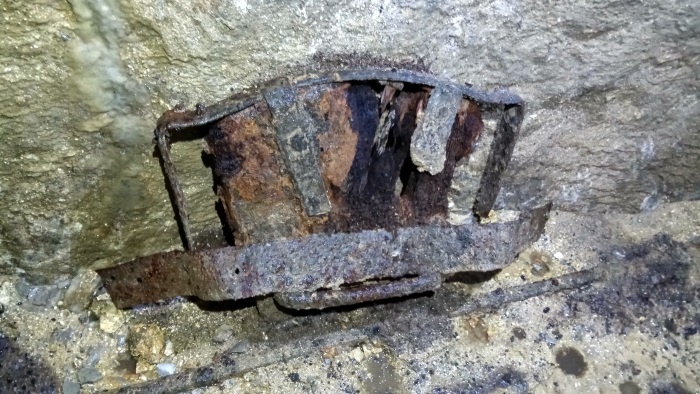 Cart in Wham (above) vs the cart in Hazard (below) 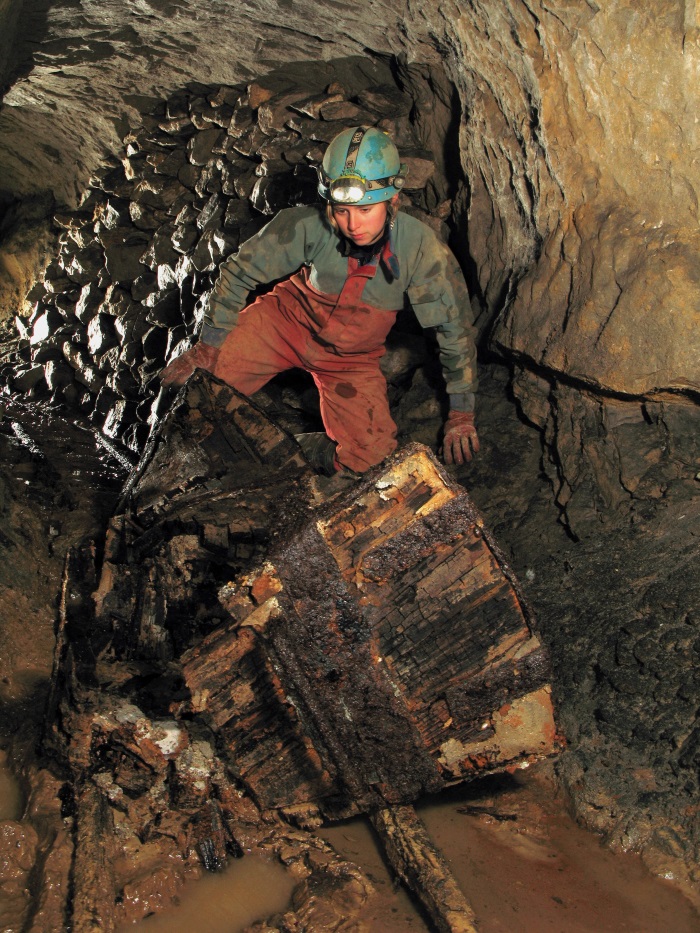