A pre-monthly meet trip into Dr Jacksons for myself, Dave and Luke, to begin the resurvey of the place and generally have a look around.

We successfully surveyed up to the third pitch and made the pub by 10pm, so all in all a pretty awesome evening.

A fun filled trip into Newburgh Level, report can be found here:

My Last proper trip was to be had, again down Rowter inspecting the boulder choke at the top of Sunrise persuaded from something Rob2 had said to Rob (Eavis) a couple of years back about it looking interesting. I knew there were gaps in the choke but my two previous visits to this secluded part of passage have always been turn around points thinking of the journey out. Rob seemed keen to get in one last trip with me before I departed so we met up at the farm for a late start at 8pm which worked for us both.

Having made the trip the previous week I knew exactly what ropes we would need to bottom the cave, so with minimal gear we hastily descended and made our way to the new extensions. To my surprise the Ginged Shaft was already rigged and adding to this delight the following pitches were aldo rigged meaning no gear required at all except for the entrance rope - YAYYY! This sped things up and it didn't take long for us to make our way through the Ice Cream Trail and make easy work of ascending the Chrystal Orchasm.

I was feeling fairly fit at this point in my life whilst Rob was feeling fairly fat so I had some time on my hands waiting about for Rob at the top of the pitches. I switched my lamp switched off and waited inside The Throne Room for him to catch up not forgetting to pick up the crowbar en route as I did... It was at this point whilst in complete darkness I noticed a distant rumbling sound of a subterranean watercourse! As Rob made his way up I switched my lamp back on and once he had caught his breathe we both listened to the distant rumble! The sound was very enticing indeed. A lot more enticing than the Choke up in Sunrise...

We ascended the last pitch to get on with the Job in hand and climbed the last few metres to the choke. Rob took a good look first. He climbed inside the choke to a very unstable void in the boulders which Rob2 had previously been to. He murmured something so I placed my head a little closer so I could understand. He basically said it was like death on a stick and confirmed it was void ridden but nothing worthy of pushing if you valued your life. He exited the void and made way for me to have a gander. I got waist deep into the void before agreeing and sliding my way back out wiping the sweat off my brow - eek! 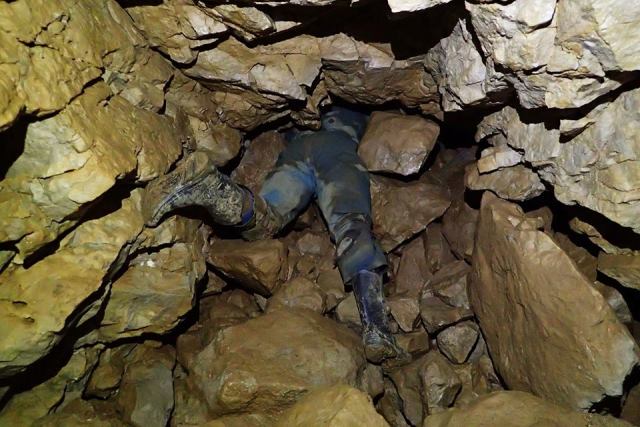 Half in the choke in Sunrise

We ventured back down to The Throne Room. Still armed with a crowbar and shit tons of enthusiasm for the prospects of this end of Rowter we started attacking the floor at the upmost top end of the chamber. We dug down taking it in turns approx. 1m with three sold walls and gaps starting to form in the floor. A draught started to emit from the floor and as you dug down with your head to the floor the rumbling noise got louder and louder. This truly was an exciting moment. Rob made a fantastic job of shoring the shit by building a wall to one side for the digging spoil to sit behind. 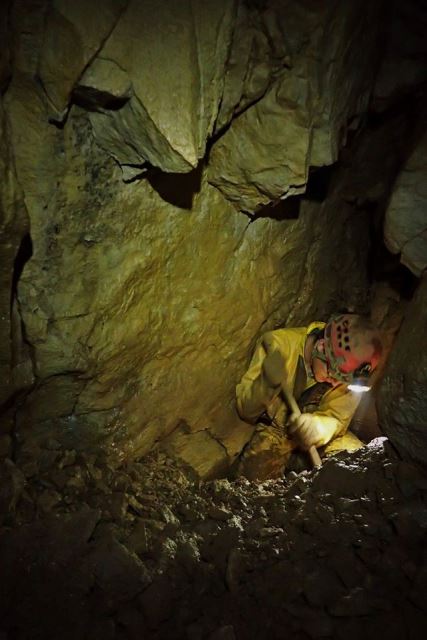 Pretty knackered and sore handed (I), we sat down and looked down at what we had dug out. Rob had secretly carried down a hip flask to celebrate our last trip together so we took a few swigs of some fine whisky to mark the occasion and though of some shoddy names to call the dig finally conjuring "A Game of Thrones" which suited marvellously! We started to descend having spent an hour or so at the dig wondering if Luke would ever make it here... Rob seemed to think not but I'm a glass half full kinda' chimp. I was feeling the wrath of Rowter on exiting the Ice Cream Trail with all its tight awkward pitches and squeezes and was quite glad to make it back to Decisions Decisions. All that was to do now was the final few pitches and the entrance shaft.

We regained surface at 1am the following morning treading quietly not to wake everything at the farm as we passed by. After a quick change in the freezing temperatures. We had a gay moment and said goodbye and I finally got home at 2am and was in bed by 2:30am ready to walk the dig in a few hours time - Oh joy!

A Awesome final trip in the Peak!