I tagged on a last minture trip for a jaunt down JH with the above mentioned characters. Was fairly pleasant for a change as I just had to top up with no ropes or rigging equipment and just cave. After a brief navigation error on the Cartgate I met Keith and Lee in the Miner's Workshop and headed down whilst Lee rigged Leviathan - This place still impresses me now! At the bottom of Leviathan we decided to split in to smaller groups and to exit the cave slightly quicker I joined Keith and Lee as thy ploughed on towards the Speedwell streamway. Here I have to make the point that Keith and Lee were both wearing Neo-fleeces which I thought was ever so slightly a bit muchos - but hey, they are YSS afterall!

An enjoyable soaking through the bung and a rancid crawl through Colostomy and we we soon talking rubbish and making our way through Five Arches. The temp outside was pretty cold and I was extremely glad to be putting warm kit on back in the TSG. One lad had left his dry gear up at Rowter with a thanks to their mates instructions.

Underground just under 2 hours and the other party were a smidge longer...

Thanks Keith and the YSS for me tagging on to their trip. 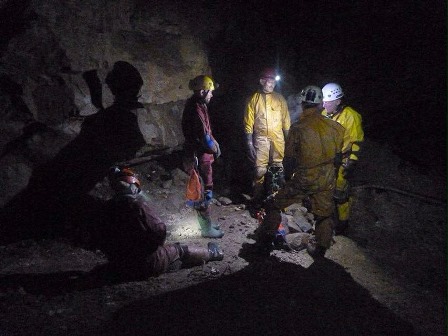