Well after a full day of down pour we proceeded with our prearranged trip down Intake Dale Mine (IDM). It was Team 4some and a rumour that Townsend might be topping up, hopefully this'll spark his interest and he might be able to finish off his first trip report from the place! Anyhoo...

The lay-by was super shitty and we got changed shouting profanities at the weather gods. We practically ran across to the mine and I inserted myself fairly quickly through the entrance slot into the dryness below. The entrance pitch was fine, even with the big lengths of scaff. The second pitch was starting to get wet and a stream could be heard below. Below... (third pitch) was super wet with a stream flowing in from back towards the entrance and a stream emerging half down the opposite side which is the wall of stacked deads! - eek. This was a bit worrying as all the water was coming straight through the ginging.

We headed for the dig and got to use the stemples for the first time which were fantastic! The choke looked a lot more scary now with a large void right above the dig face with a huge bonnet sized boulder chocked against the fractured back wall only being held by a small football sized boulder. Rob made a start on scaffing the place, once Jeff and Luke had joined us Jeff and I headed down to the natural at the bottom to see if there was any noticable watercourse. We made our way down the ginged shaft and climbed past the RSJ into the natural where Brexit rift heads off. We could now hear water very clearly so followed it down to the cross rift. Water was flowing from the roof which is the obvious continuation of the second pitch where the water emerges from tailings at the bottom of the shaft. Further on the water was RUMBLING!

We followed the roar and headed under the waterfall and down the rift to the large chamber where a stream 5 times the amount of the waterfall was thundering out from boulders in the floor. This was crazy!! I was jumping about, shocked at how much water was down here. We could tell the place obviously flows at some point due to the sediment down there but this was unreal! We followed further down the rift to the obvious cross rift where SamT had previously climbed from and traversed the roof, it was here where we decided to turn around.

We had a quick look down Brexit rift, the bottom 4m or so being flooded back up to the same level in the big rift. We grabbed a couple of pieces of scaff and headed back to the Blackjack Choke. We caught SamT coming down the ginged shaft and told him to get the others to head down here to check it out not wanting to miss the pub. Jeff and I took the scaff right up to the choke and had a quick inspection. Just as Jeff poked his head in a fistful size stone dropped through the freshly placed chamber which made Jeff come straight back out. Hopefully the whole place will stabalize itself for the next trip as it was looking super necky!

We headed back out and it sounds like Rob and SamT had a tad more wet trip than us as Rob got fully submerged in the large rift (TWICE), traversing a foot above the water level and jumping/falling in.

We retreated to the Stags for the monthly meet to find the whole Bar 3 inch under water! A memorable one for sure. 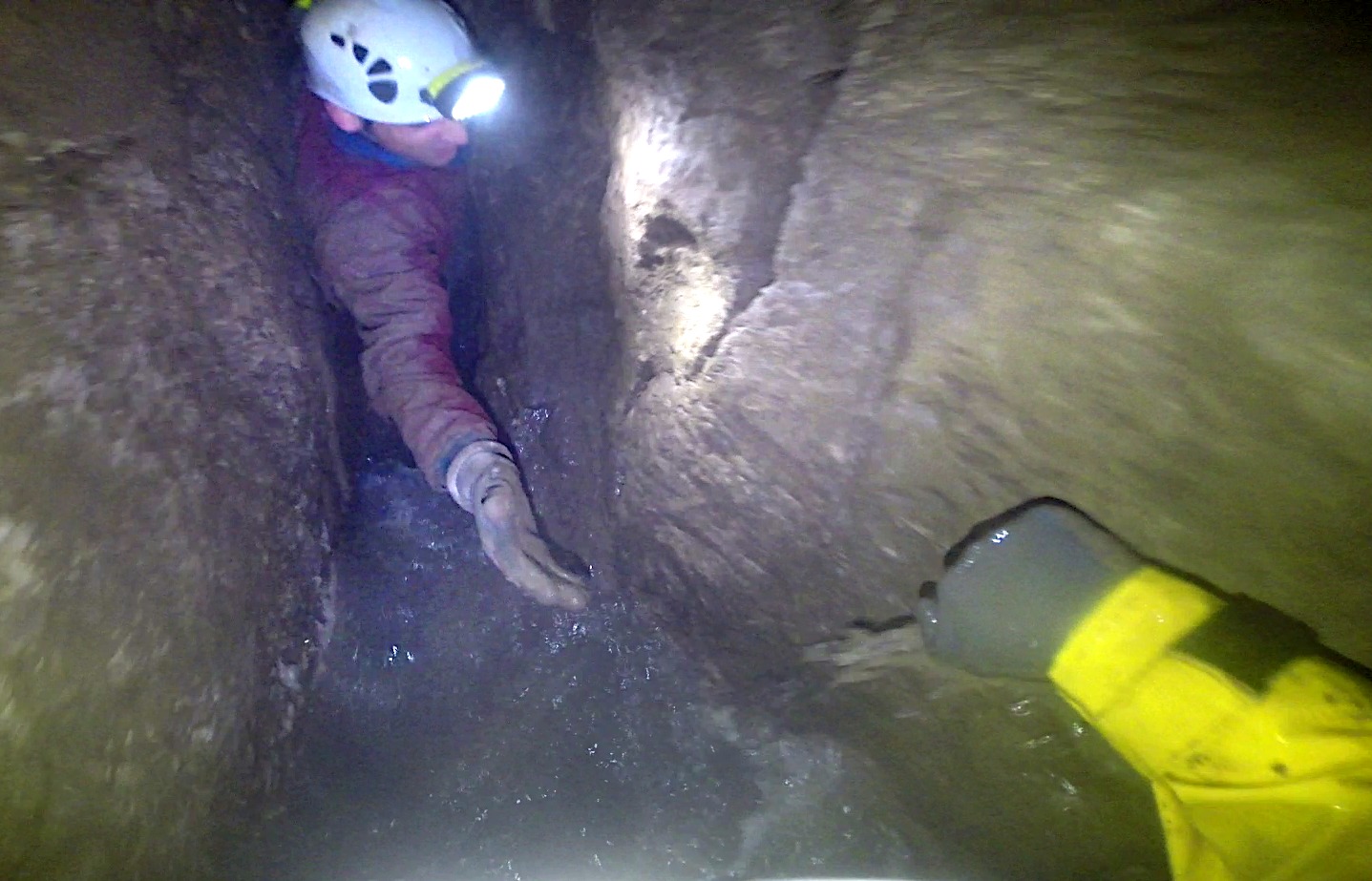 Sam and Rob battling along the (never seen before) streamway