Just the two of us this evening (Rob and I) with a plan to;

a.) Survey the loop from the bottom of the entrance pitches to the Black Jack Choke to determine the distance between the two.

b.) Continue to survey through the dig and on to the loose pitches that Rob had descended into last week before finding the Engine Shaft and de-rig afterward.

c.) Descend and explore the Engine Shaft and continue with survey.

We opted for an early start of 6:30pm which'd give us plenty of time to hopefully make a good call so we could make the pub. We ran into a slight glitch when Rob's DistoX decided not to work. Luckily we managed to borrow one from Moose who we conveniently met in the Red'n which proved to be a perfect place to calibrate said disto whilst having a proper pre-beer by the warmth of the fire! 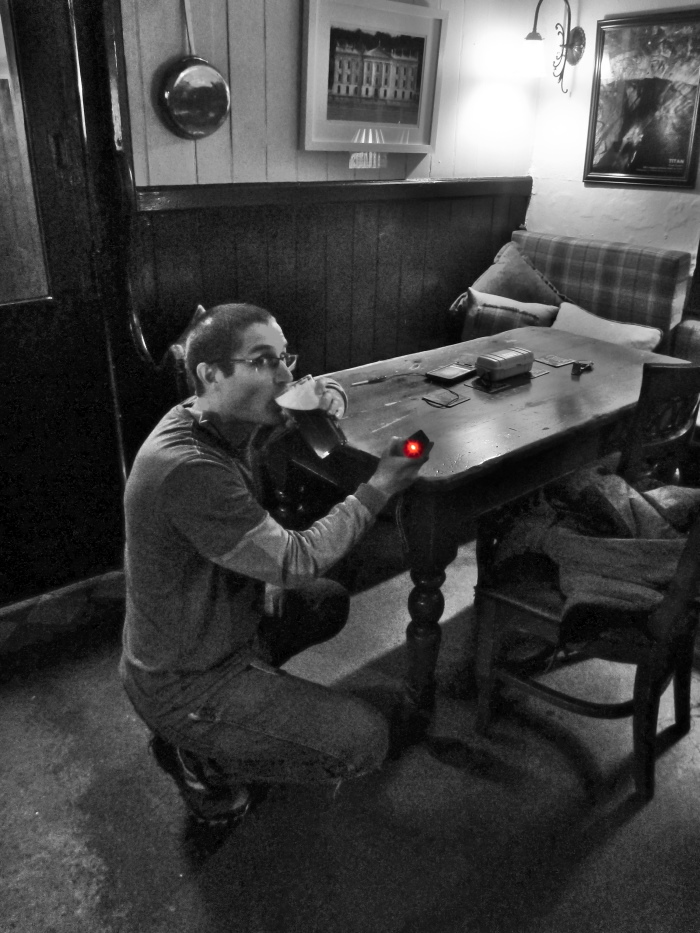 Rob Calibrating the DistoX in style, Photo by JonP

Not long after calibration success we made our way over to IDM parking and quickly got kitted up. Luckily we didn't have much to carry in, just one bag containing the dinky toy drill, a 40m rope and the survey gear so easy going. We made quick progress as Team 2some surveying the loop around to the Black Jack Choke noting that we should really check out the level running of East at the top of the 2nd pitch. Once at the Black Jack Choke we took a moment for Rob to make sure the survey was correct, which it was - Great! Turns out the choke above is only 2m above and to the left hence why the vocal connection was crystal clear.

Right... time to survey through the choke. As we were back shooting Rob headed into the choke feet first for the first time, unnerving as it means you'd have to thumble about blind in the choke. When we say the choke is dodgy we do really mean it, the choke is pretty damn terrifying. There's an obvious reason why it all collapsed in the first place obstructing these two sections of the mine. Like Jeff kept saying, "It must've been a bad day in the office when this first collapsed!" - Yup. As Rob had now been through the choke a handful of times he was quite comfortable doing this so we surveyed through enough for him to be able to continue by himself to the top level beyond. He kindly offered to take the bag from me whilst I made my first pass through the choke.

I'd been dreading this for weeks now! ever since the initial fall had happened to Rob at the start of the choke. I also opted for the feet first method as I really didn't fancy keeping my head high in the unshored void beyond the scaff tunnel which'd give me plenty of chance to look around at how unsafe it really was! So... feet first, looking at the floor. Unfortunately I cocked up and got stuck the far side of the backed up rope. I made my way out of the scaffolding tunnel and kept super low, slithering down into the funnel of boulders with the hanging death teetering inches above my head. At this point you clip in to said back up rope, mainly as a placebo because of the 25m drop below you and the fact that it is anchored to the scaffolding which is only there as another placebo to make you think that you're safe in the void - which you're not. Realistically if you were to weight this back up line you'd most definitely bring down the whole choke.

Once clipped in, still looking down, I down climbed on the small but sort of solid ledges to the single bolt rebelay but now with a solid roof over my head and finally took my first breath after entering the choke. Cool, i'm still alive and just one more pass before the trip was over. I continued on the rope whilst Rob surveyed down the three pitches from last week in some very unstable mine workings with some lovely natural features. Once we reached the bottom of these pitches we built a cairn in the window to the Engine shaft so we could create a loop in the survey.

It wasn't until we wanted to de-rig that we realised we'd left the bolting hammer on the safe side of the choke! - Dang. Luckily for us all the nuts on the through bolts were loose so we could de-rig by hand which I did on my way up. Unluckily for us was that any bolts we were now to place would have to be bashed in with a rock and tightened by hand. It's a known fact that most exploratory cavers have done this at least once - right? 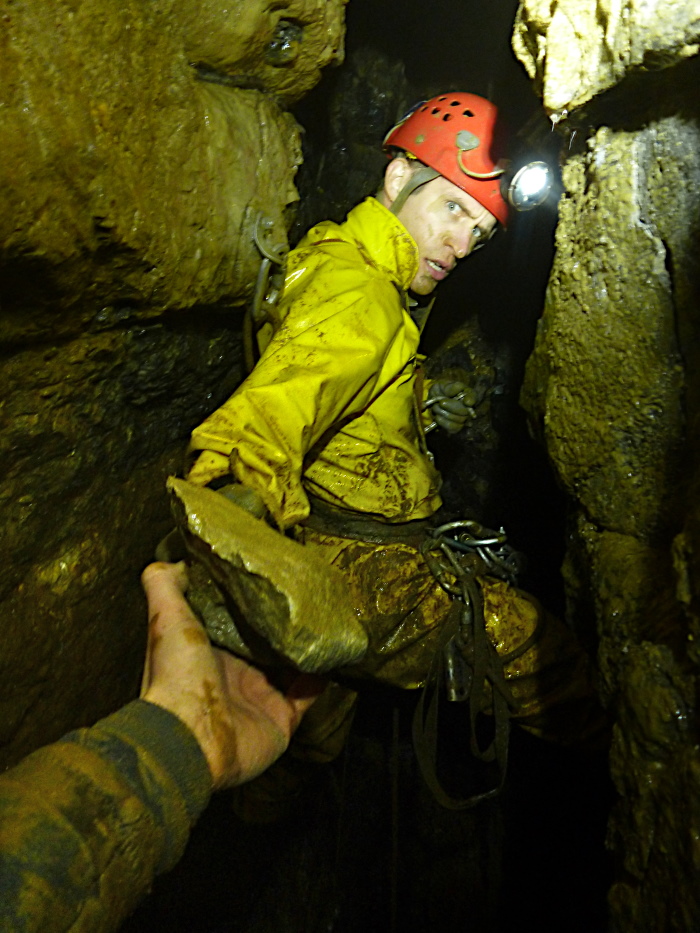 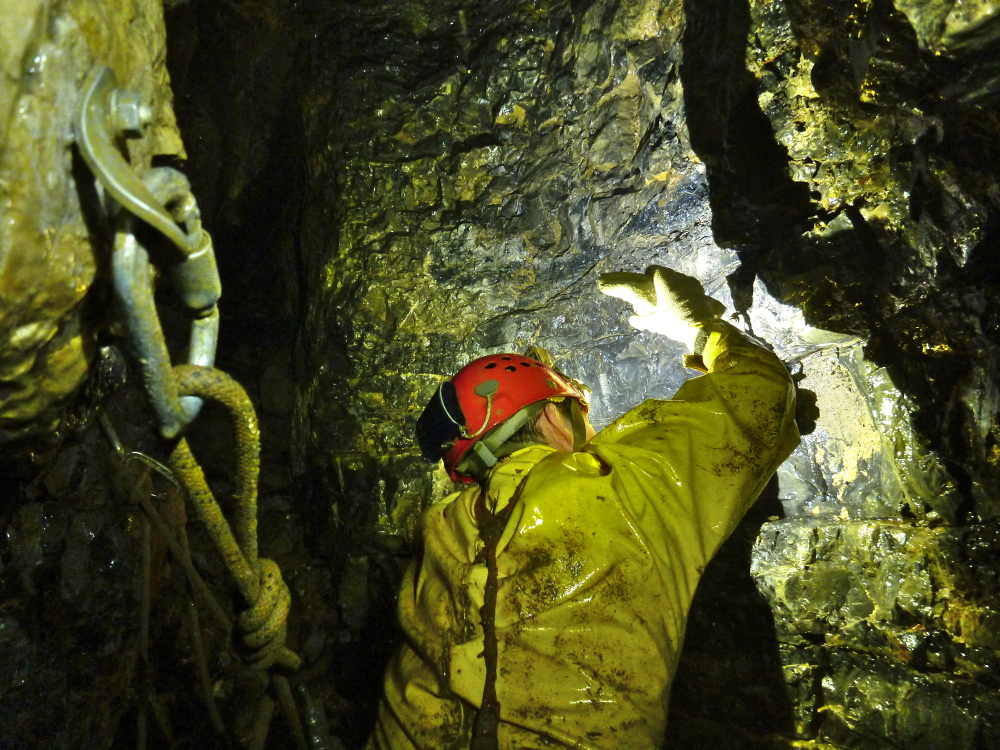 So we made our way to the Engine Shaft. This was so nearly plan A if we didn't have a disto but i'm glad it turned out to be plan C and we'd managed to accomplish everything so far with relative ease and unscathed. Rob made an excellent job of drilling the bolt holes with his toy drill whilst I had a little glance up the climber a few feet back. Rob also made an exceedingly shit job of smashing the bolts into their new homes totalling one in the process whilst getting cramp in his leg and wanker's cramp in his forearm.

He rigged an awesome Y-hang which would get us all the way to the bottom some -30m below. He abseiled down shouting up to me what he was seeing in real time. The rift passage opposite the cairn chamber looked very good and very natural and would add to the lead list. As he approached the bottom it sounded like it was maybe gonna crap out and the Engine Shaft seemed to be getting smaller as it got deeper. He YELPED up with excitement saying it goes and once in a safe spot he shouted, "Rope free & bring your camera." 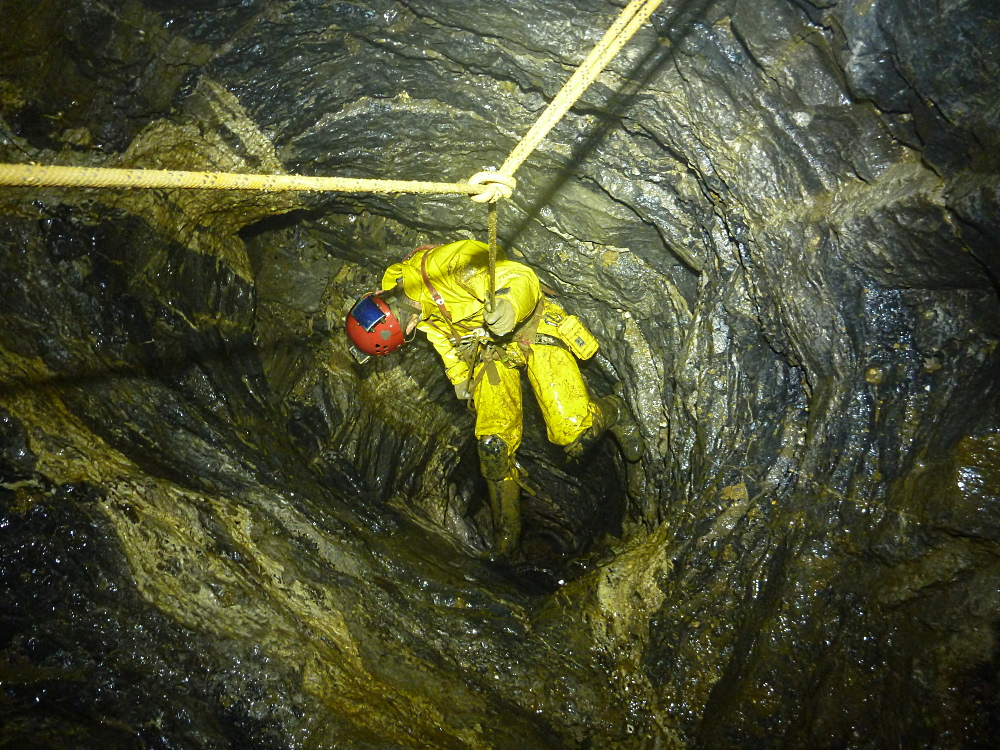 I wasted no time and jumped on to the rope which was pleasant to descend compared to the 11mm stuff in the entrance series. I took a good look in the 2nd potential lead and turned around to spot a large initials carved into the wall just above the Cairn Chamber reading, "J.F." with "II" directly underneath. Now exploration fever had set in as Rob shouted up that he thought that we'd maybe hit the main cartgate! I took a quick snap of the initials and headed to the bottom to reach Rob. 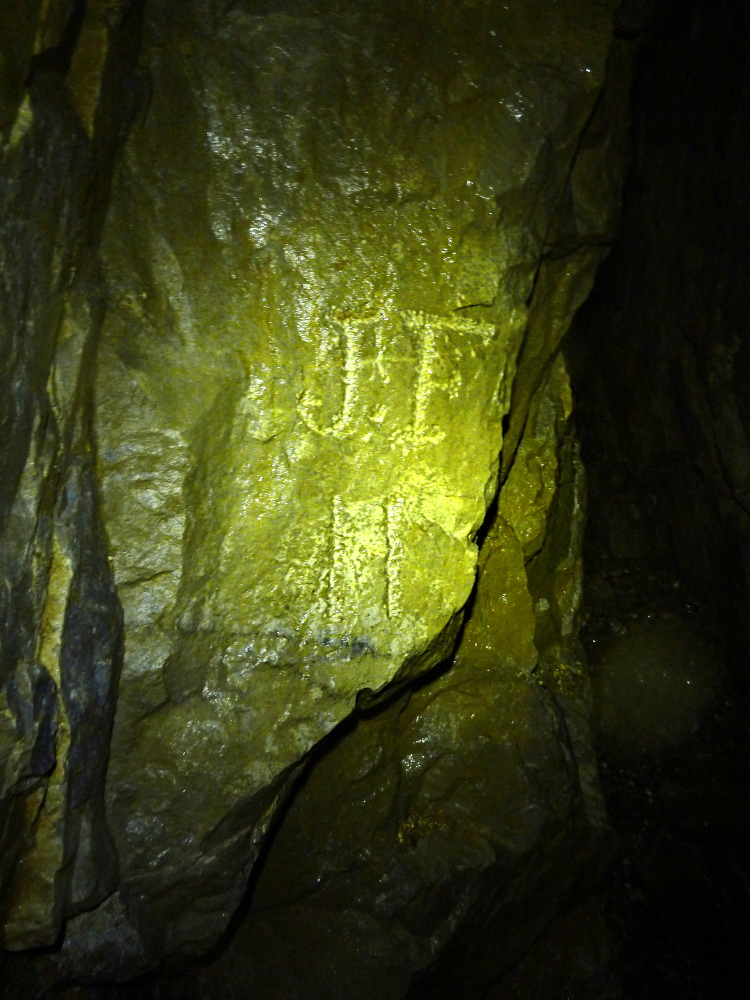 Engravings on the Engine Shaft wall, Photo by JonP

The floor of the shaft was lined with boulders but a short crawl through boulders led both East and West, West closing down within metres whilst East headed back to the choke after a short down climb. This I only looked into but looked to continue some 10m and maybe still going? A noticed here a rusted tin can holding up a stemple, holding up loads of deads - Crazy!

A short climb from the boulder floor led to the level where Rob was hiding. Rob had dug through a collapse to reach a continuation containing a railway footing hence why he got excited. Also that there appeared to be a slight but present inward draught and the shot holes had been made from the beyond the passage back to the Engine Shaft. A short way past the collapse another potential lead climbs off above in between stacking. The level ends in a natural boulder choke where the water seems to emerge from. The miners have obviously tried to pass this choke at this level but unsuccessful in their attempts. Could this be the source of the water in the east natural extensions which we saw a few weeks prior? on the way back out we found a nail and a perfect example of a clay smoking pipe just wedged in the stacking and preserved for 200+ years. This was an awesome spot and super happy to have noticed it. 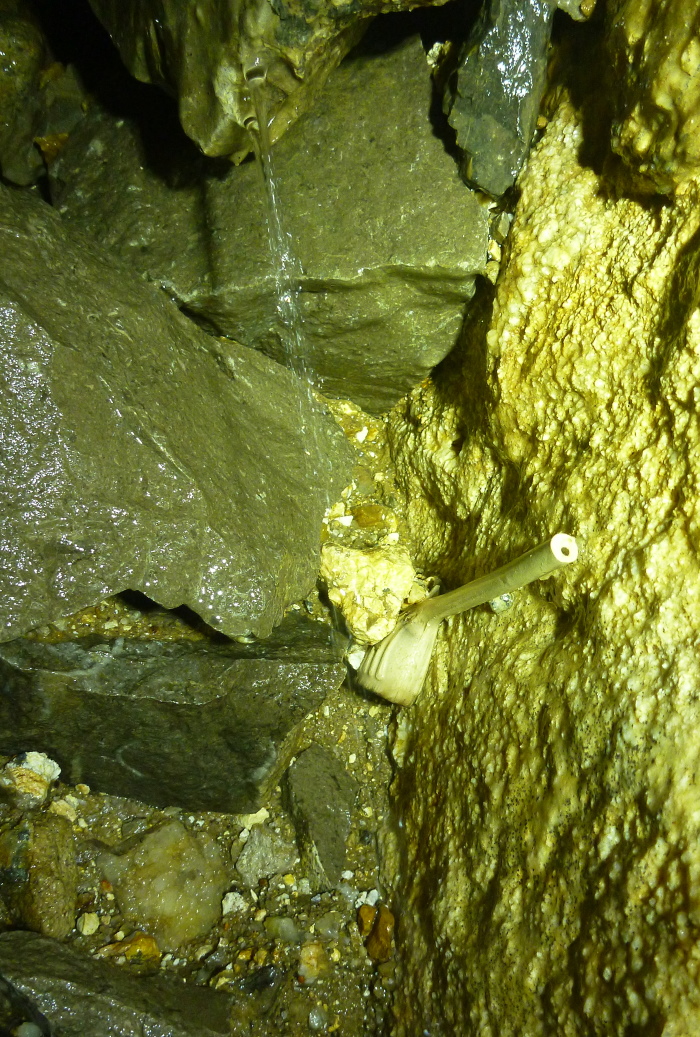 Old clay pipe hidden in the deads, Photo by JonP

Once we were back at the bottom of the Engine Shaft we decided it'd be a good time to call it a day as it was getting late. At this point we'd definitely missed the pub too so we decided to tie in the survey and make our way to surface. This was all relatively smooth and Rob still missed the big carved initials above the Cairn Chamber - Idiot! The choke didn't seem as bad going back through as long as you don't look at it when you're in there its fine, nearly bomber. We regained surface some 4 hours after entering feeling accomplished and happy that there's still lots of things to go at.

We had a couple of Brucey tinnies shoved in the car too which should have been plan A's pre beer but luckily became plan C's post beer so all in all ended on a high. A memorable one for sure.