With the new lockdown rules limiting exercise to two people, we've split up the team and are now actually getting more done per week! Here's a summary of the last couple weeks, written up by Rob and Jon...

Where to attack? After Rob’s little breakthrough the previous week down Impending Doom we decided to attack the Pankcake Dig located slightly more west and above. We removed a couple of large boulders under the Pancake Boulder which made the place feel slightly safer. We dug down following a tight rift for a few metres before our attentions waned as it was rather tight down there and the walls were collapsing in on you. I went to inspect Pearly Gates which was howling! I shouted back to Rob to sack off his efforts and join me up here. We agreed the inevitable and started to dig Pearly Gates. Unfortunately this was small and heavily calcited although the rift next to it was howling too and looked a lot better. Rob then proceeded to get himself stuck inspecting under a huge boulder, it was here we decided to leave it and see what the other two thought of the place. 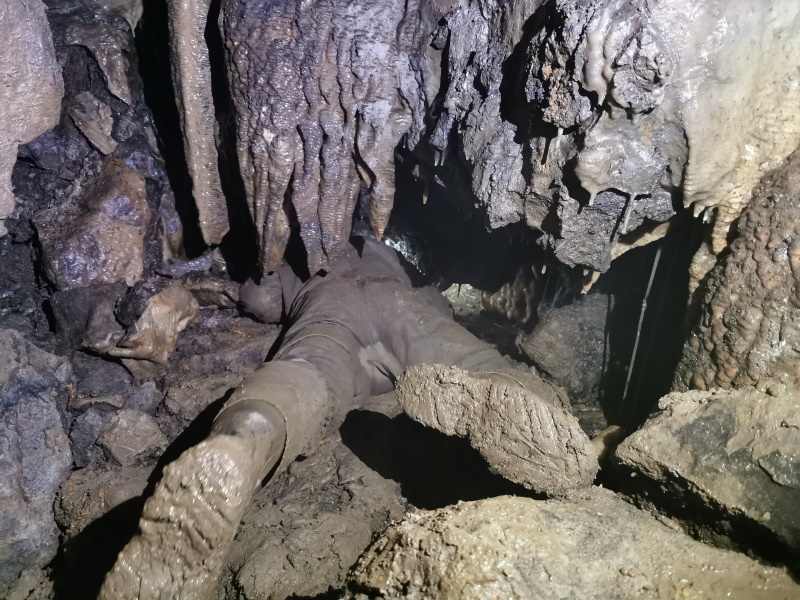 Jon heading into the Pearly Gates

Team Buxton went to inspect the new stuff unfortunately they didn’t manage to complete it missing out Pick Axe Rift. They agreed that the rift next to Pearly Gates was the best looking dig. Jeff had dug out the floor enough to make it look very enticing but gave up again when the walls started to fall down on his head. 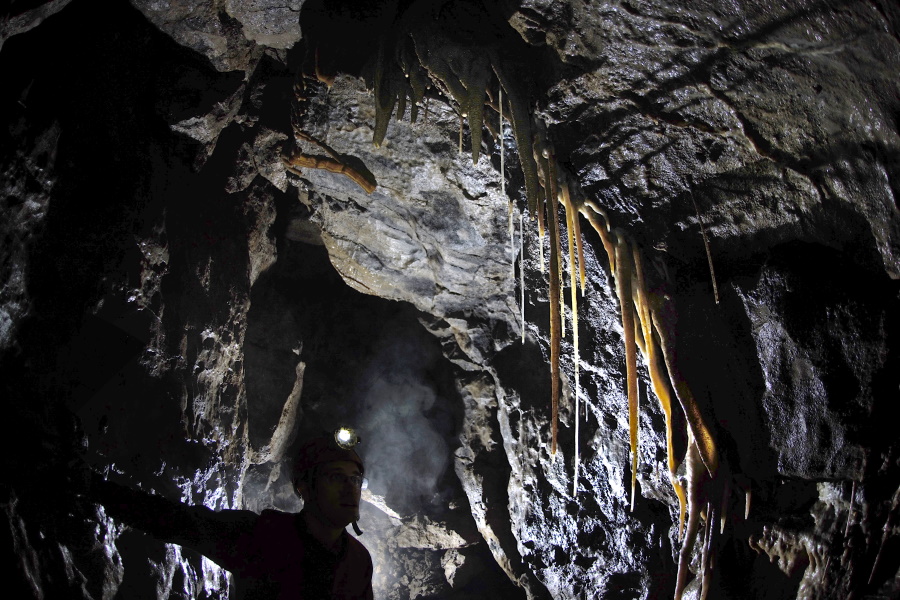 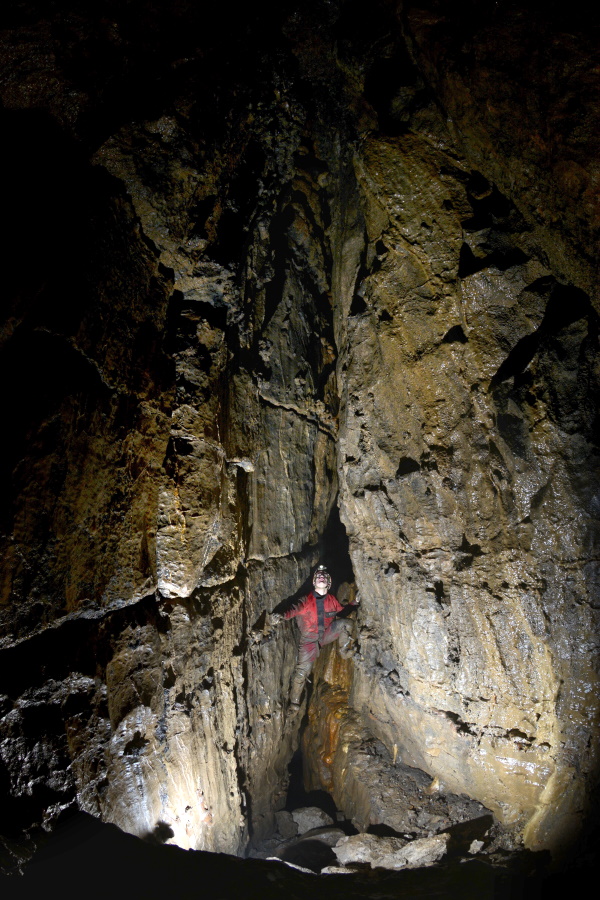 Rob in the Shattered Dreams extensions, by JonP

So Rob and I went to smash the crap out of Pearly Gates and attempt to get a photo somewhere. Unfortunately Rob forgot his phone so live coverage wasn’t an option. Jeff had made it sound worse than it was and we just decided to start pulling things out as we didn’t have anything to shore up with plus we didn’t have anything to remove large boulders. After 10min we had 2 large boulders laying ahead of us in the dig blocking a view through to an open rift with a howling draught.

Somehow we eventually managed to remove said boulders (mine a whopping 18lbs), Rob now dug out the floor and had a cracking view upwards but it looked tight. Luckily nothing fell down from above but we kept an eye on the roof as it didn’t look amazing. I took the front having chilled right down and instead of smashing the calcite floor I dug underneath for 5min and after a quick smash with the hammer had removed a calcite floor to a black hole going down. I created enough space and chucked a boulder down the shaft I was now peering down which looked to be 2m in diameter, the boulder rattled down a pitch for a long way – BINGO! This must be it. We spent the next 30min frantically digging the fractured rock below the calcite floor and left a downward sloping slot just impenetrable but easy digging. Next trip should see us through – Great trip again. 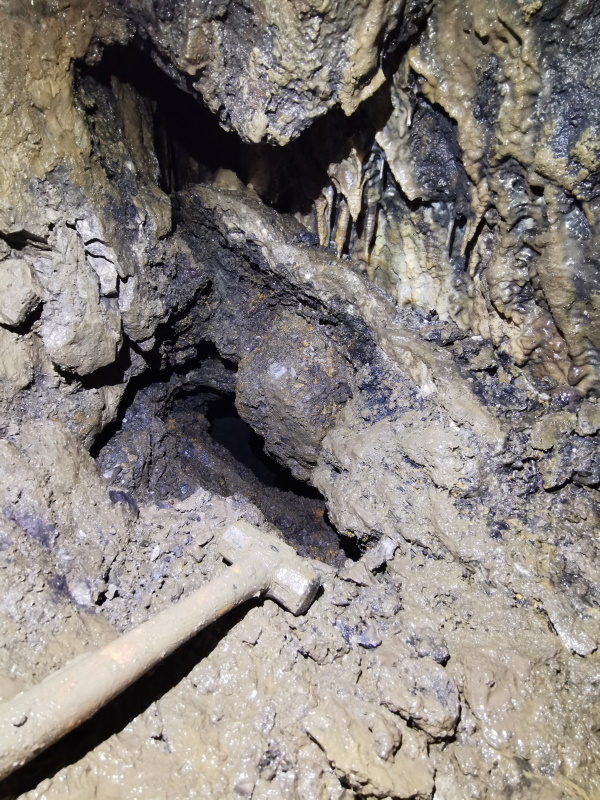 According to the survey the Pearly Gates dig lies directly over known mine/cave so today’s expectations of a connection were very high. Luke managed to bail so i nicely stepped forward. Jon was sad. Jeff worked the face first, trying and failing to get a block out from under the calcite ramp so instead chiselling away at the shattered floor. I was getting cold waiting so we swapped shortly before the end when there was enough space to get through. Bolt and rope installed and through I went. A short muddy slope popped out over a large black hole, which got bigger and bigger as it went down! Y-hang installed quickly and I was off. Oh yes, it a fine, mostly freehang down. Big boulders littered between fluted walls, all belling out into the biggish chamber below. But this is all new, no sign of people being here before, and no connection yet?!? Jeff came down with the tools and we went to explore our new chamber, Inglorious Bastards. 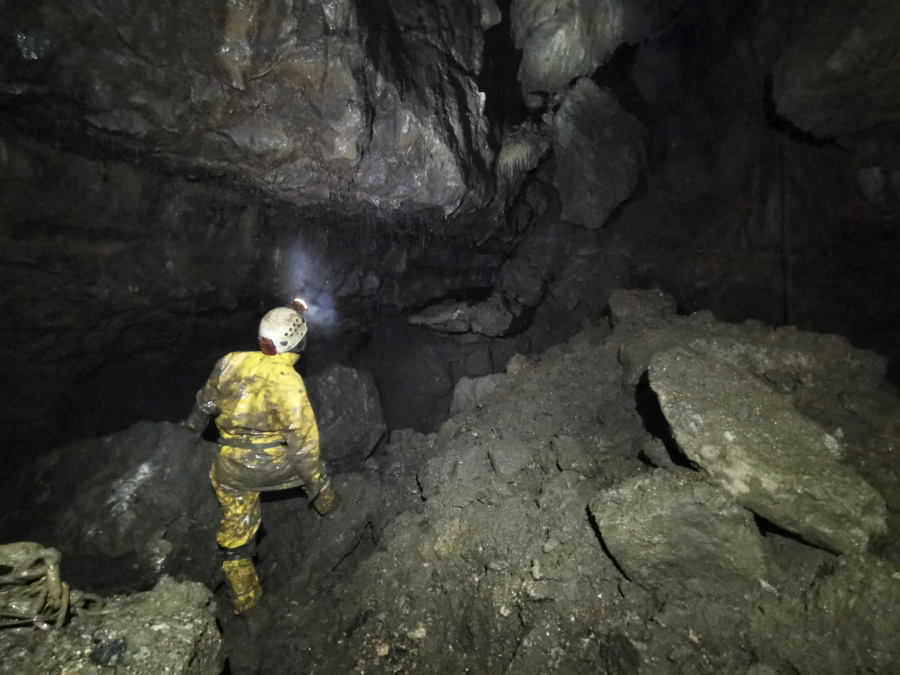 At the other side of the chamber a tall rift continues up to what looks like a level heading off North, roughly 10m up. Should be a relatively easy bolt climb. A few holes in the boulder floor looked potentially interesting but don’t have any draught. That all comes out of a well decorated bedding plane crawl to the north west about 2m off the floor, which you can hear from the other side of the chamber! Jeff stuck his head in first, being careful not to knock off more formations than he had to. It’s tight but quite wide. Unfortunately the floor is a mixture of glutinous mud and pools of water, so with the blast of cold wind it’s really not very pleasant going. A coating of black soot over the mud gives this place it's name Black Draught. I had a look and got a bit further to a part where it’s even wider. The biggest way on is straight ahead into a small pile of boulders, with the draught issuing right from the middle of it. This is going to be a hard place to dig, but it’s great to finally have a proper horizontal passage in here. 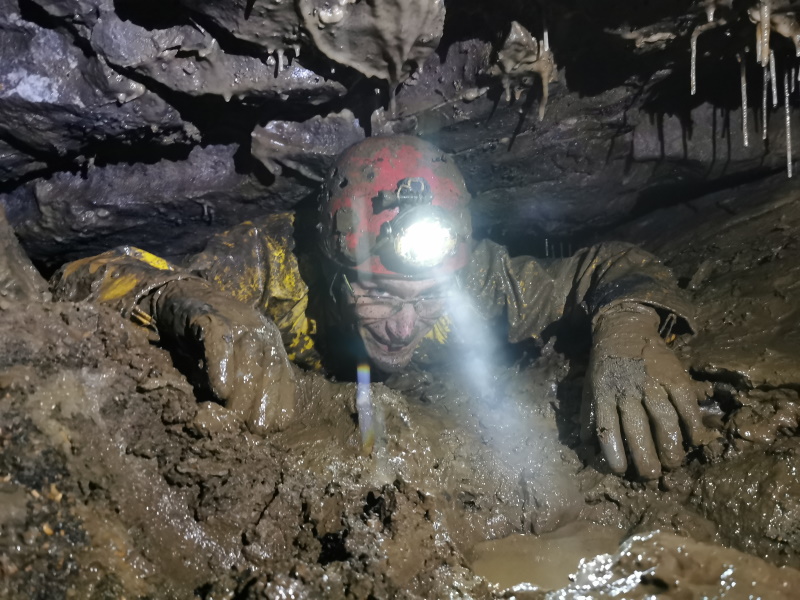 Back in Inglorious Bastards on the opposite wall is another passage, seemingly the downstream continuation. Jeff inserted himself and could see a good few metres over a clay mud floor. Again no draught, but an easy dig this time.
So, we took a few pictures and started heading out, adjusting the rigging as we went. It’s left me with a strange feeling of excitement but also frustration. The connection is constantly avoiding us, whilst the cave keeps giving us more. What a crazy project this has been so far! 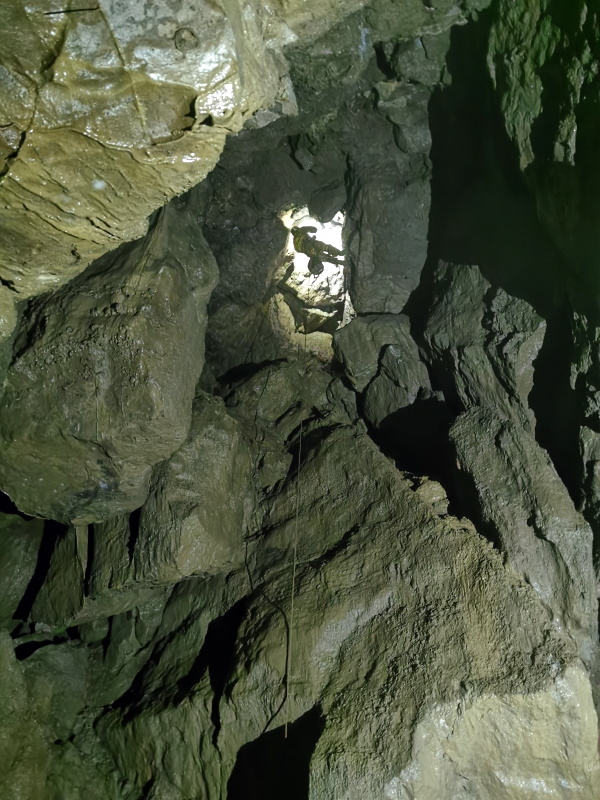