Just Rob and I tonight with the mine being left "WIDE OPEN" from last weeks efforts. It's safe to say we were buzzing with excitement enjoying some rather stubby pre-beers whilst sat in my car. We decided to take the drill and a bag of lovely 11mm rope saving surveying and photography for when we have a few more TA members present.

Rob bombed down first and I followed with the bag full of rope which proved to be a right bastard all the way through, IDM being somewhat an assault course on rope. It wasn't long before I was ascending The Engine Shaft to the eye-hole where Rob and Dave had pushed beyond last week. Rob had scurried on leaving me to guess my way down the loose climbs and ledges, after a bit of faffing I found Rob's voice, he was placing a bolt somewhere underneath me, shouting at me to keep off the floor. After a brief exchange I realised we were only separated by a foot of loosely stacked deads hence his eagerness for me to stop moving. I did as I was told and climbed over the top and back underneath to meet him at the pitch head. He then took the rope from me and abseiled down in to The Tap Room.

I was knocked back by the dimensions of this place! A large bedding chamber with a central stacked funnel heading down to the rift below. The pictures from last week did not do this place any justice! There seemed to be leads at every corner but nothing wide open like the abyss below. Whilst Rob was bolting the pitch head I made a quick inspection of the chamber to try and find more evidence of T'owd Man but other than a few soot marks on the roof from candles I couldn't find anything, very strange as such a big space would've made a convenient workshop/break area.

Rob was ready to descend, about 5m below at the base of the stacking the rift shot off proper to the west and out of sight with loads of stemples, it looked tight and awkward so we decided to drop straight down where we'd been chucking rocks. It sounded good but looked terrible! All the water dripping in the tap room seemed to accumulate and cover the walls where we were about to descend - bugger it! Rob went down quickly leaving a short deviation gaining entry to the shaft proper. He was gone. I shouted down to him and after a couple of seconds he shouted up for me to come and join him, saying the abseil was pretty shit but there was a further pitch to descend. 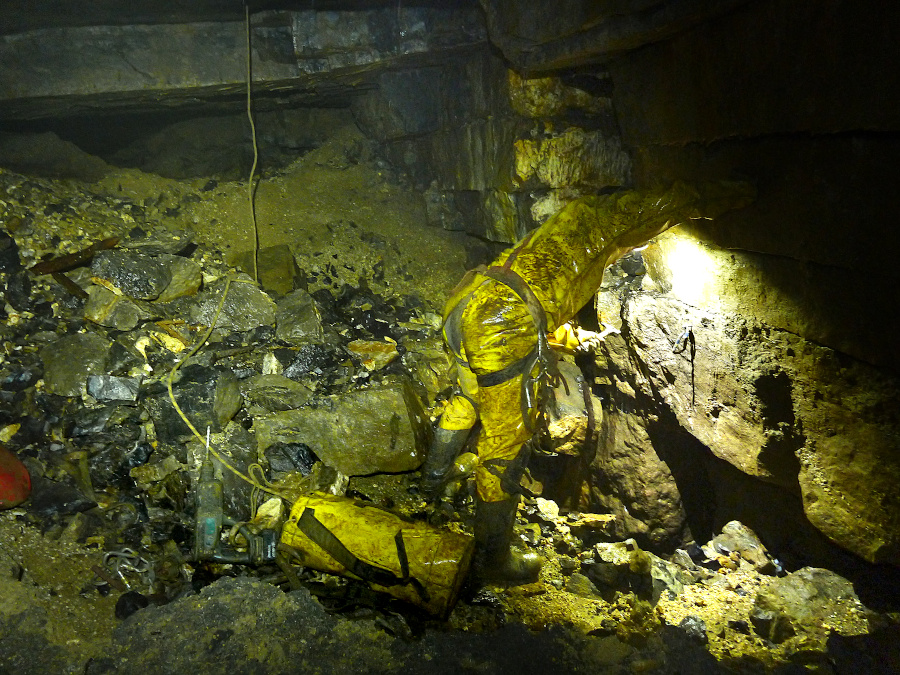 Rob rigging down from the Tap Room (JRP)

I dropped down the funnel of deads and started a slower more detailed abseil of the shaft. As soon as I got below the deviation I was thoroughly soaked! I descended as quick as I could to a jammed boulder and realised I needed to drop west a further 5m to gain the floor. On closer inspection the rope was now resting against a large area of stacking which I was not happy about. I jumped off the rope and down-climbed the rest and made a mental note to avoid this on the way back up.

Rob was now bolting a further pitch to a larger level below us, similar in dimensions to the bottom of The Engine Shaft. The pitch was only about 6m and to the West headed for about 10m in water to a collapse. We followed the level East to hole in the floor which ended up in a void of boulders, presumably the other side of our natural West Choke. In the floor of the chamber the water drained down a small hole to pooled water a metre below us. Above this we collapsed a small stacked wall to reach a further void above with more evidence of miners tampering with the large natural choke with socket marks in the walls and rotten stemples on the floor. This all draughted strongly towards us. To the South a small rift natural rift headed off but too small to enter at this height.

We de-rigged this section thinking we might need the rope further on. At the top of this short pitch we bridged across to the westward continuation which was an upward slope in the large worked out rift. At the top of the slope the rift above widened massively and started to feel a bit more natural than the previous section, and with a huge draught heading up the slope to the west. Above us now was a humongous stemple ladderway which stretched out 20+ stemples high and out of sight! The slope beyond started to head down-hill but tightened dramatically. On first inspections it looked mega tight but after a quick dig and the removal of a small pokey out stemple Rob was through and gingerly bridged forward as on the other side of the squeeze the floor dropped 4m to the boulder floor with a small wet continuation heading back East but not inspected on this trip.

I followed through - literally and joined Rob on the far side, up and down another slope we hit a small clean washed shaft in the floor. Rob said I could take the lead and I made no hesitation in jumping down the shaft. As soon as my toes were on the floor I knew we'd hit big! To the West the level stretched off at walking height with stone stemples lining the roof. To the East Same again but obviously not as exciting as the way forward is West. I shouted up to Rob telling him we'd done good! He joined me in seconds and we inspected the Eastward extension which was in knee height water to a collapse (see photo). We then proceeded West through the large passage slowly inspecting the walls for more hidden gems left from T'owd Man. We soon reached a climber heading off above us followed quickly by a blocked natural cavity to the North with a possible draught but hard to tell. This was then followed by a further collapse which we could climb over. At the base of the collapse was and is the only Miner's ladder I've ever come across in Derbyshire, remnants of a wooden ladder with metal through the rung steps. We gingerly climbed over this and at the top of the slope the roof stretched out above where we caught a view back East and up West although the West Didn’t look too appealing!

Back at floor level looked the most appealing lead. A way on dropped down, deeper than floor level and was covered in mud. This looked the source of our flooding and the potential natural continuation! This was short lived as after a short crawl it ended at a large collapse more man made than natural - bugger! We decided to do a possible first "round trip" up and over back East and start on our way out. A short thrutch in the rift got us to the top of the climber we were looking up into from below. Westward continued above the blockage below but looked tight and awkward and would be a lead for next time and maybe tackled from higher above. We continued back East up and over false floors and dropped back in to Westward side of the tight squeeze. We negotiated the squeeze with ease and once back at the bottom of the rope decided to de-rig so we could traverse across over the top of all this next week.

Now was the fun part, the wet shaft...

Rob headed up first which meant I had the job of carrying the drill and making sure the rope wouldn't tangle when we pulled it up from the top. Rob shouted down that it was as shit as it looked and he also didn't realise how bad the rope rubbed on the stacking when he descended earlier in the evening. Once the rope was free I wrapped the drill up as well as I could in the tackle bag and freed the rope so it would pull up smoothly. I had to free-climb the lower half of the shaft to avoid the dodgy stacking and with large perched rocks on the opposite side I really didn't give two fucks about about anything as I started to get waterboarded from above. I climbed the rope like a demon stopping at the occasional breathers out of the water. Here I would look above to decide my next moves.

I made it to the top and although thoroughly soaked was quite warm from the efforts. We left most of the gear in The Tap Room ready for next weeks pushing at the higher level and started to make our way to surface. As soon as we got East of the Black Jack Choke we could feel the cold fresh air from surface. By the time I'd reached the entrance pitch I was freezing my knackers off and ran all the way up the dale back to the car.

Rob was already changed and declared it was 11pm and we might make the pub so I told him to go and we had a plan B of drinking post beers in the car park if it was closed. Getting even colder than before I eventually got my sorry, cold self back to The Anchor where we supped some lovely cold beer whilst sat next to the radiator. After an extraordinary evening down IDM we even lucked out at the pub as they were once again cleaning the pipes!

Great trip and another memorable evening!