Only Rob and I on tonight's adventure and with a later start of 7:15pm and after a quick pre-beer of the IPA variety we were underground for 7:45pm. Tonight's plan was to climb the engine shaft beyond the Black Jack Choke. Estimated to be approximately 70m deep from surface we pop in around the -45m level leaving this much to climb up, possibly straight to surface.

We didn't waste time and Rob got himself as high as our rope would take us on this evening a little under an hour with lots of faff and knocking down lots of loose rocks on his poor belayer below (Me). The Engine Shaft opens up to the west leaving two possible ways on but not as enticing as the natural westward boulder choke below. To the East is tightly packed ginging with a blocked natural looking passage but surely heads straight into known workings.

After placing a Y-hang at the highest point and nearly dropping the rope down the shaft whilst clipped into the bolts we started to descend with anticipation of making the pub for a swift 'un. We can see up a further 10m to what looks like timber and possibly sheet metal which might be the start of the blockage to surface - only time will tell. We estimate to be about 18-20m below surface. 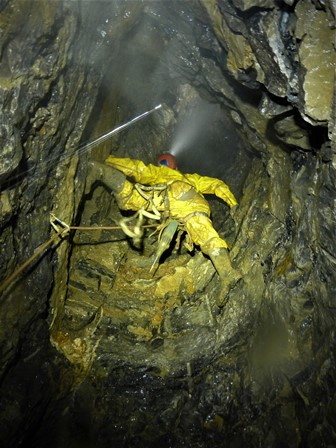 Next week we shall continue progress with this and hope not to kill one another...