As we stood in the car park, half naked, finishing off our beers, I said to Rob, “Why did you tell them 9pm?” I was keen on his keenness but this was totally unattainable.

Let me get to the point… We were heading back to Sooty to push the boulder choke we’d found on the previous trip. The upward trending choke looked to be an easy dig with only a few boulders blocking the way on and a tantalising view beyond into blackness! We had discussed during the week and the final plan was Dave B, Rob and I were going to head to Sooty whilst Jeff and Luke were topping up a bit later and heading down Rocky Horror with hopes of a possible connection.

Our plan was carry little gear and head on for glory. Our kit list was; one SRT kit minus the abseiling gear and cows tails as we were putting a short ladder on the Sooty pitch, surveying gear, smoke bombs, a lighter, a spare lighter, a small crowbar, a lump hammer and remembering to pick up a long pokey bar from the big chamber below Sooty. This made the whole trip a lot easier and Rob was thankful for not having to drag a drill through Loper Lust for once! We reached the big chamber below Sooty in record pace and were all pretty hot, especially Dave having pre-empted him on wearing a thermal top as it’d get cold pretty quick at the choke with the mega draught howling through.

I prusiked up the pitch and placed the ladder on the lowest possible hang due to its shortness and lack of spreader. We laughed for a short while before Dave tried it first, it held so Rob headed up with his long pokey bar sticking out of his wellie (like something out of Bad Caving tips). Now Dave was heading into new territory I pushed down the Sooty choke first and shouted for him to come down whilst I made an effort to dig out the floor at the bottom as it was a nightmare climbing back out last time. Rob followed and we were now ready to cross the swamp. We cobbed in a few more boulders hoping to make some sort of causeway, I used one of the T’owd Man’s timbers to create a hand support which pushed straight into the abyss the mud being at least a metre deep and ended up being a good footing which was soon lost in the gloop. Rob pushed the pokey stick in to try and reach the floor but it went 4ft down with no signs of stopping. We carefully crossed non-the less and Rob headed into the choke to see what he could do whilst Dave and I continued to build the causeway.

Within minutes Rob had dropped a few boulders and a football sized lump of Galena which now sits permanently at the base of the choke. After removing a few more rocks Rob went quiet and finally confessed that a rock had hit him in the face. I went up to check and dug out a small muddy section at the top to enable a slightly roomier space. When I got to Rob his nose was cut open on the bridge right where his goggles sit. The contrast of the mud and blood was a spectacular sight, he said he was fine and I continued to dig the mud before he went for a second round with the rocks above. Hitting rocks from below with a 4ft bar strains the arms somewhat so it wasn’t long before Dave was called up into the choke and made quick progress of enlarging the upper section, removing some large boulders in the process whilst being careful not to peel away too much of the back wall. The time was now 9pm. 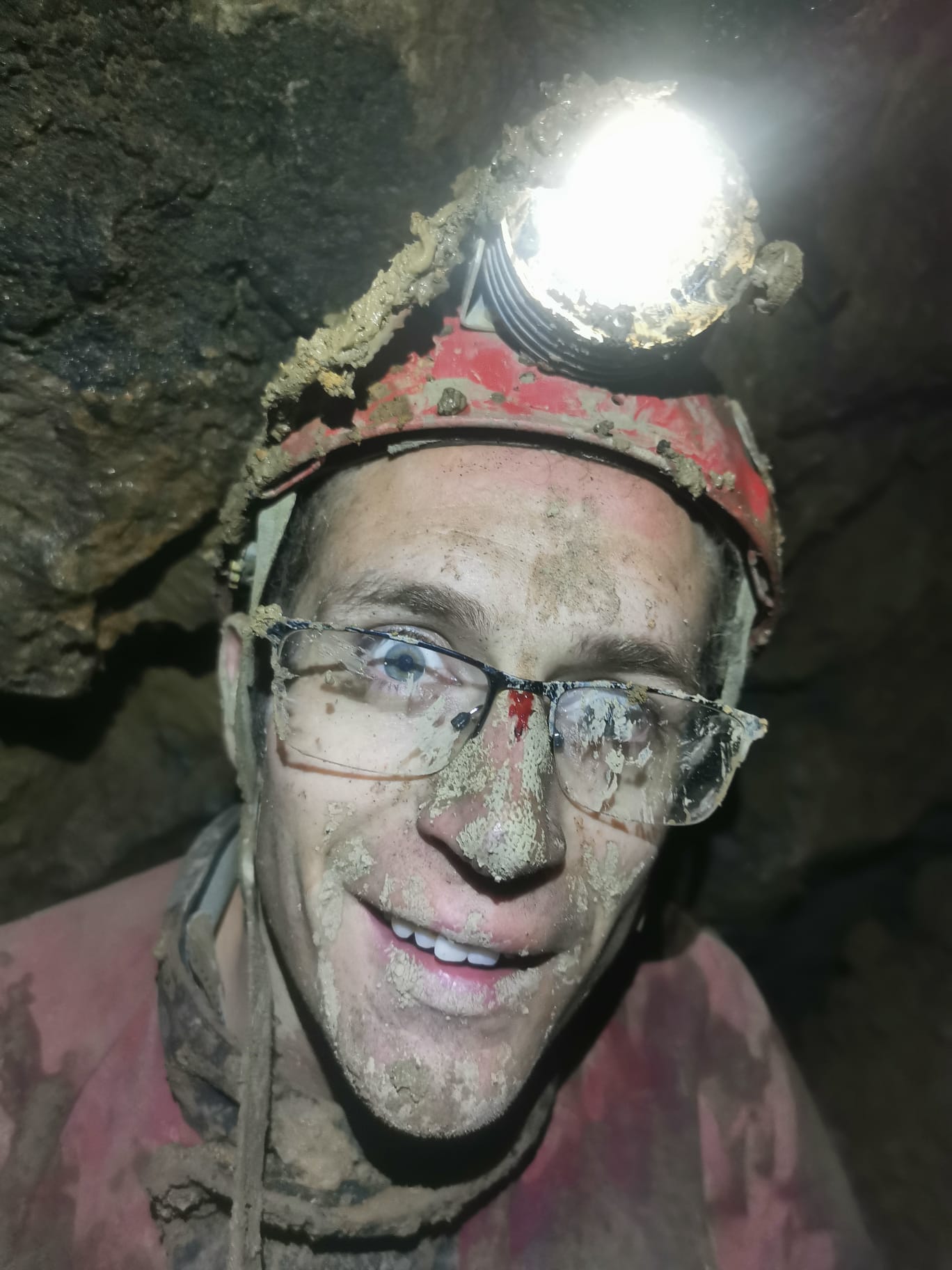 Rob after battling the choke 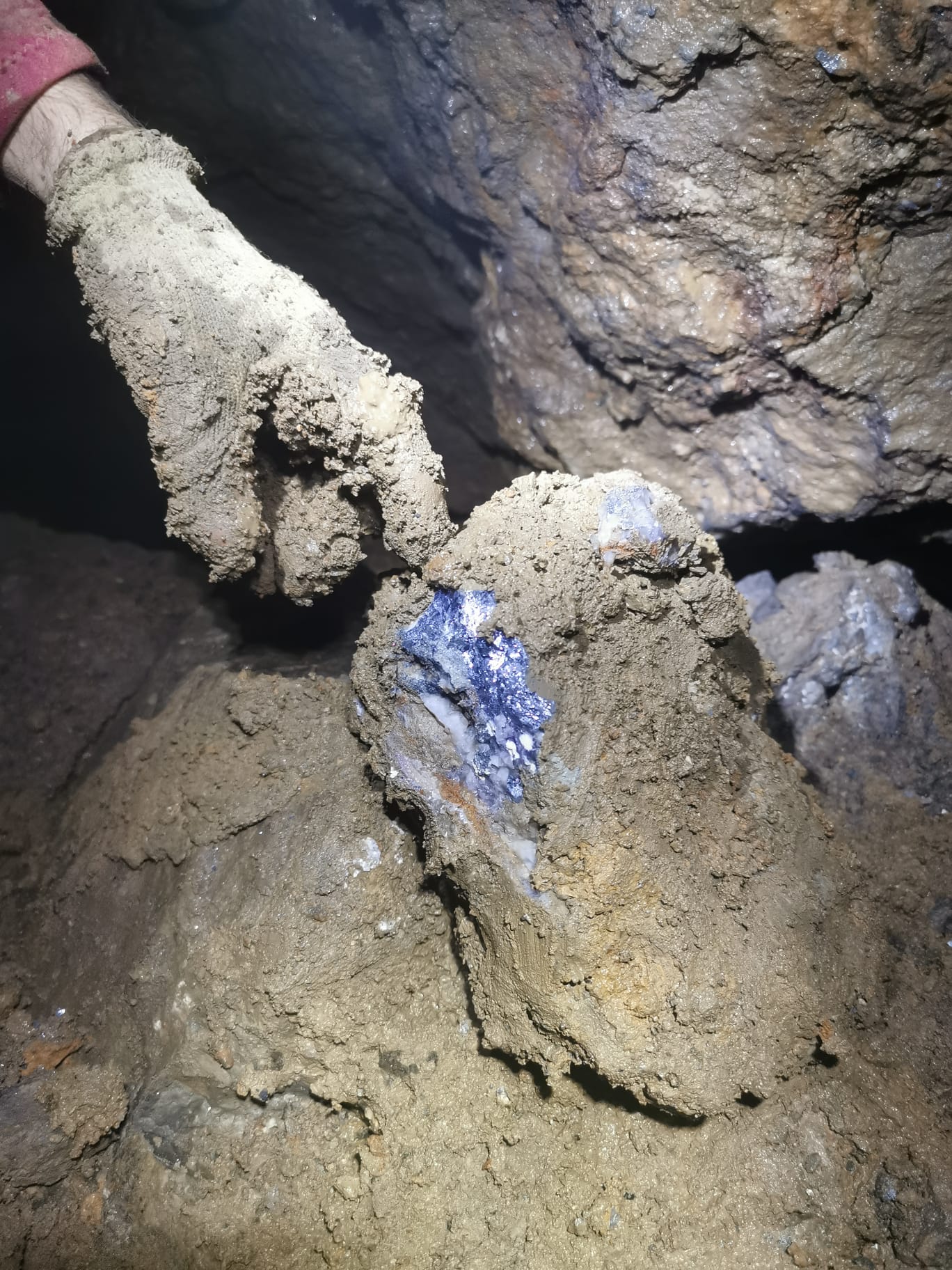 This was what I was on about with Rob during the pre-beers. He’d agreed to set the smoke bombs off before we left at 9pm. There was no chance in hell we’d be through the choke having explored, surveyed and ready to leave at 9pm – Heck we’d not even made it through the choke! Dave now said the choke looked big enough to pass. Rob took to the reigns once again and pushed through the poised, undercut boulders and immediately started whooping and swearing with excitement. “It’s bigger than I thought!” Dave was next up and helped by moving a large boulder from the entrance squeeze, I hastily followed.

We were now stood at the Eastern end of a 12m high by 20m long chamber - The Diceman. The roof was lined with some humongous boulders delicately poised on what looked like nothing revealing a view up to the rift stretching off above and a potential lead. The walls were clean washed and the whole place was natural with your typical Stoney shell bed features and no evidence of T’owd Man except for a couple of rotten timbers in sockets suggesting it’s probably quite old workings up here. We headed west towards our objective (an artistic connection with Rocky Horror.) The floor began to rise here in thick gloop and finally we reached a huge choked rift at the western end which felt very Rocky Horror esq. We had lost the draught somewhere in the chamber and after a short muddy climb at the western end I reached a gap between boulders that the draught was howling through! I climbed back down now 9:45pm and we started to survey back out. 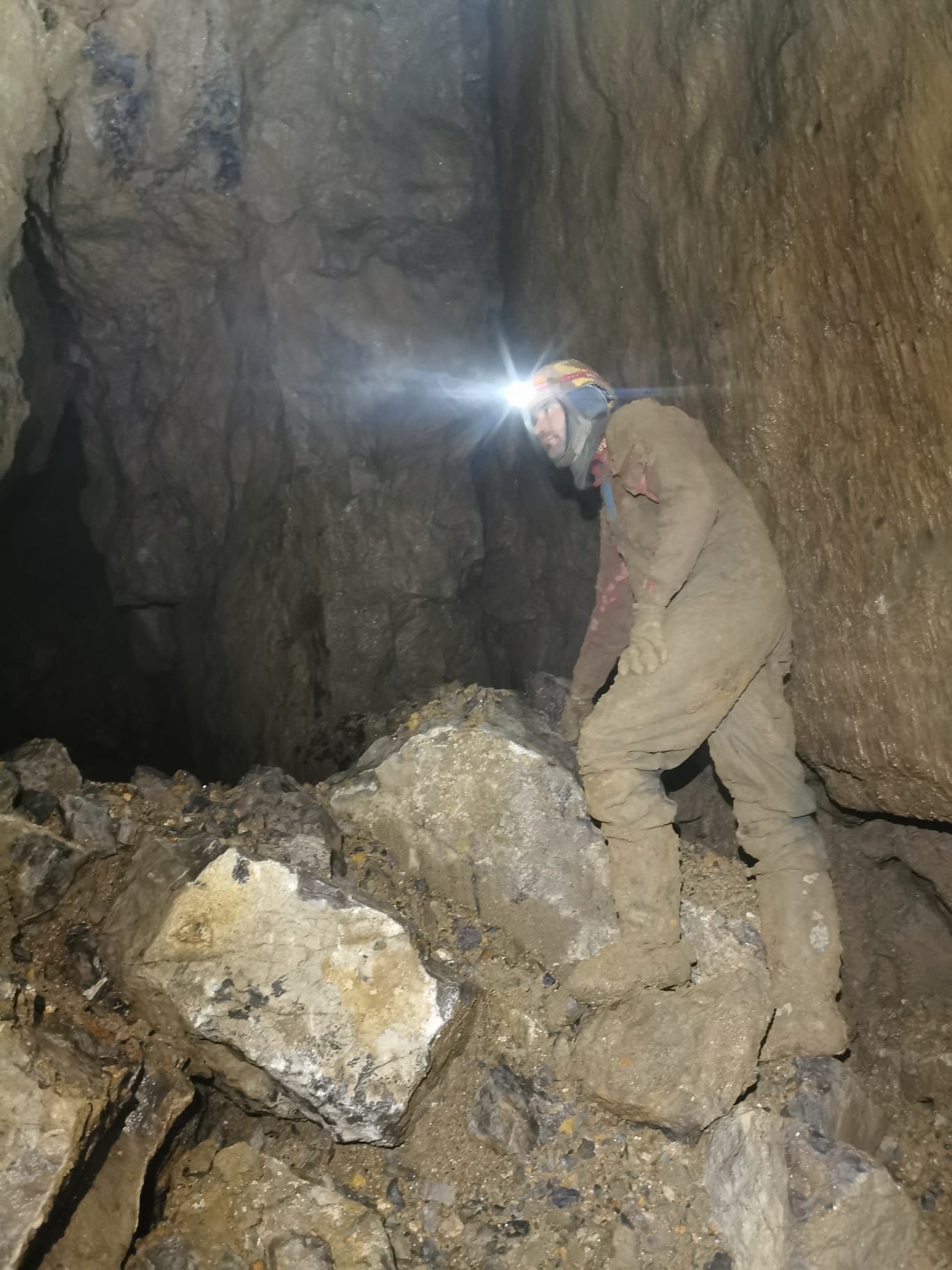 We lit the smoke bombs for Jeff and Luke, the smoke heading straight up to my little draughty hole confirming the draught and after inspecting the bolt climb through the poised boulders carried on with our task of surveying back out to the base of the climbing shaft in Sooty via two boulder chokes which Rob made easy work of. By the time we’d completed our mission it was now after 10pm, finally reaching surface gone 11:30pm to see Jeff and Luke cowering from the rain inside Luke’s van. The warm temperature and rainy conditions on surface reminded us of Hidden Valley in Mulu, it felt tropical. We started chatting with the guys who after finding out when the smoke bombs were lit confirmed they’d seen smoke almost immediately around the Movie Room/Rocky Horror area (but not down the pitch) around 10pm, which proves its proximity. IT now started to lash it down on the surface so with Jeff and Luke now gone we huddled under Dave’s boot lid supping a well-earned post beer and pondered over future prospects. 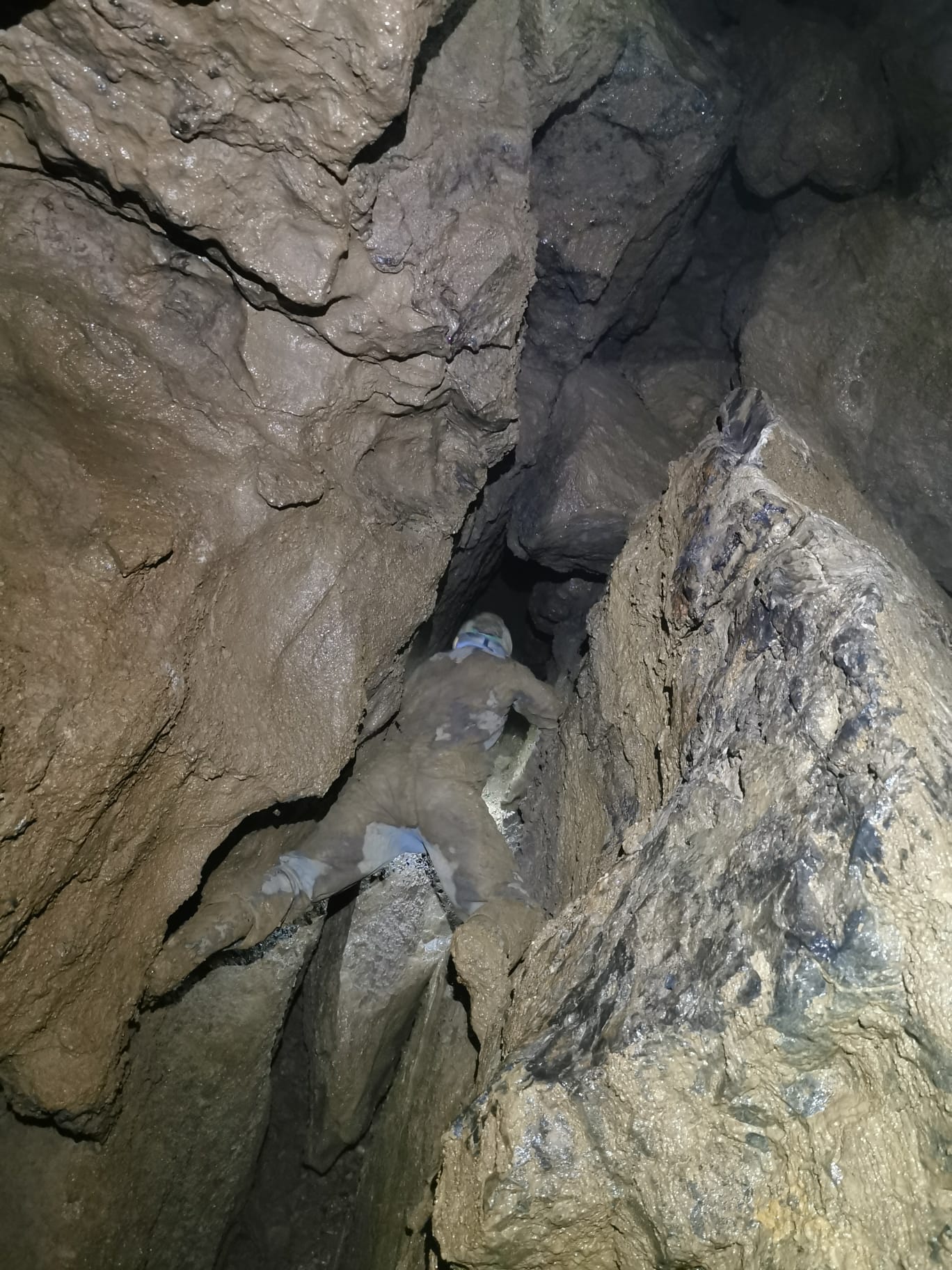 Jon climbing the choke at the Western end

The survey shows the two to be roughly 20m away horizontally from the section Rob had dug into the previous week in Rocky Horror whilst also being at the same height. For ease of the evening trip we’ve decided to re-inspect the area around Rocky Horror before we head back to the other side.

The artistic connection will have to wait a little while longer…