Here Rob and I were, once again, alone, supping on a couple of Wizard’s in The Anchor talking about how nobody else takes this whole cave exploration stuff seriously. Tonight we were once again TAP (Team Awesome Proper), two of the founding members and from past experience TAP find shit and get shit done! This would be no exception.

We headed for IDM to check the ongoing leads in “Rate Angle” which we explored last week, it lays a little beyond and above the aforementioned TAP Traverse. We chose the light drill for a possible traverse beyond Rate Angle whilst also keeping in mind an eastwardly trending extension which could be easily climbed. When we finally reached Rate Angle we sat for a moment and discussed our options whilst we both sweated our knackers off from the efforts of getting up here with little distraction (IDM is kinda like an assault course – fun, until your knackered and trying to get out). We chose the easy option B and headed for the no gear lead. A short traverse over the pitch leads to a narrow section which opens up into some taller workings. Here we climbed what appeared to be a collapsed staircase constantly stepping up until reaching a floorless abyss where you would have to bridge across to the next section, but always heading west. We reached a floor then continued to traverse the roof to a further floor. The way forward didn’t look great but a climb up here gained access to multiple ways on and felt very natural. Excited we climbed upwards and gained a section which felt like we were high up in the old entrance series. We headed east and upwards passing under stacked deads to reach a small natural passage heading south but only went for a couple body lengths. The way east continued as a tight squeeze at floor level. I pushed this up a slope to reach a huge open cavity heading east and up out of sight. This section is yet to be explored. 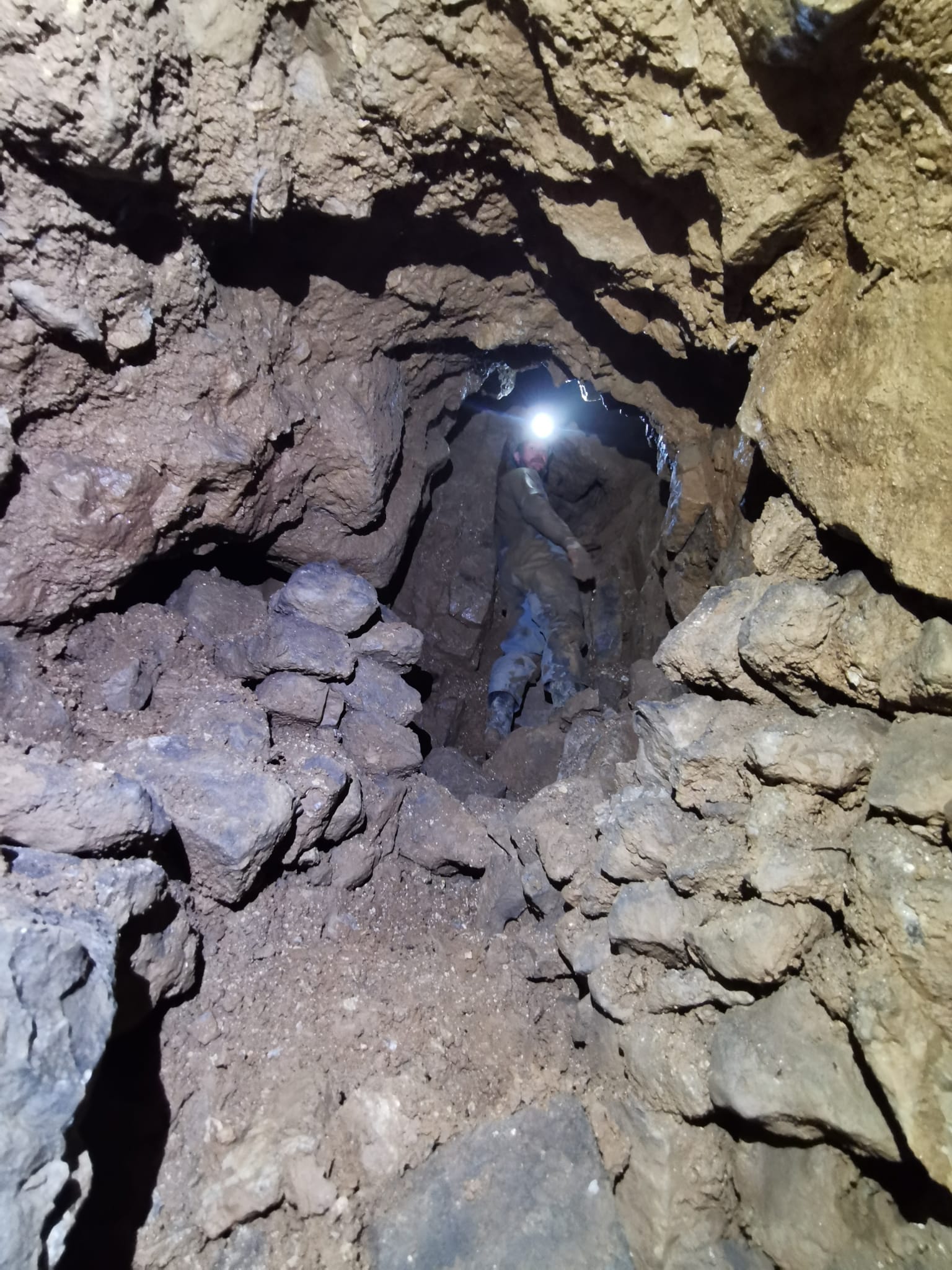 We decided against pushing and surveying this as we wanted to head west, up the valley with anticipation of stretching beyond our previous limit in the mine, just beyond “Stop Flattening Me”. The route west was indeed wide open. We had two options - a short climb up or a short descent to a solid floored level. We chose the climb as staying high had worked so far. We started to traverse up bridging in the rift and soon found ourselves over a large drop which suddenly ended at a small slope up which appeared to be a choked shaft. Rob could see up and beyond but it definitely wasn’t worth digging at this point. We both spotted a potential climb and traverse behind us (east) which would most likely bypass this point but again will have to wait for another day.

From here all we had to do was slither down what we had previously bridged over – easy. I’m glad this did indeed link back up with the previously explored workings as it would’ve been a struggle to get back up. Our stupidity payed off and we were now stood in very smart looking, enlarged, natural rift. We believe T’owd man had probably used this section at some point in time for something as it was much wider than the rest of the place and it somehow got the name – “Gary Kitchen's Amazing Kitchen” or “The Kitchen” for short. 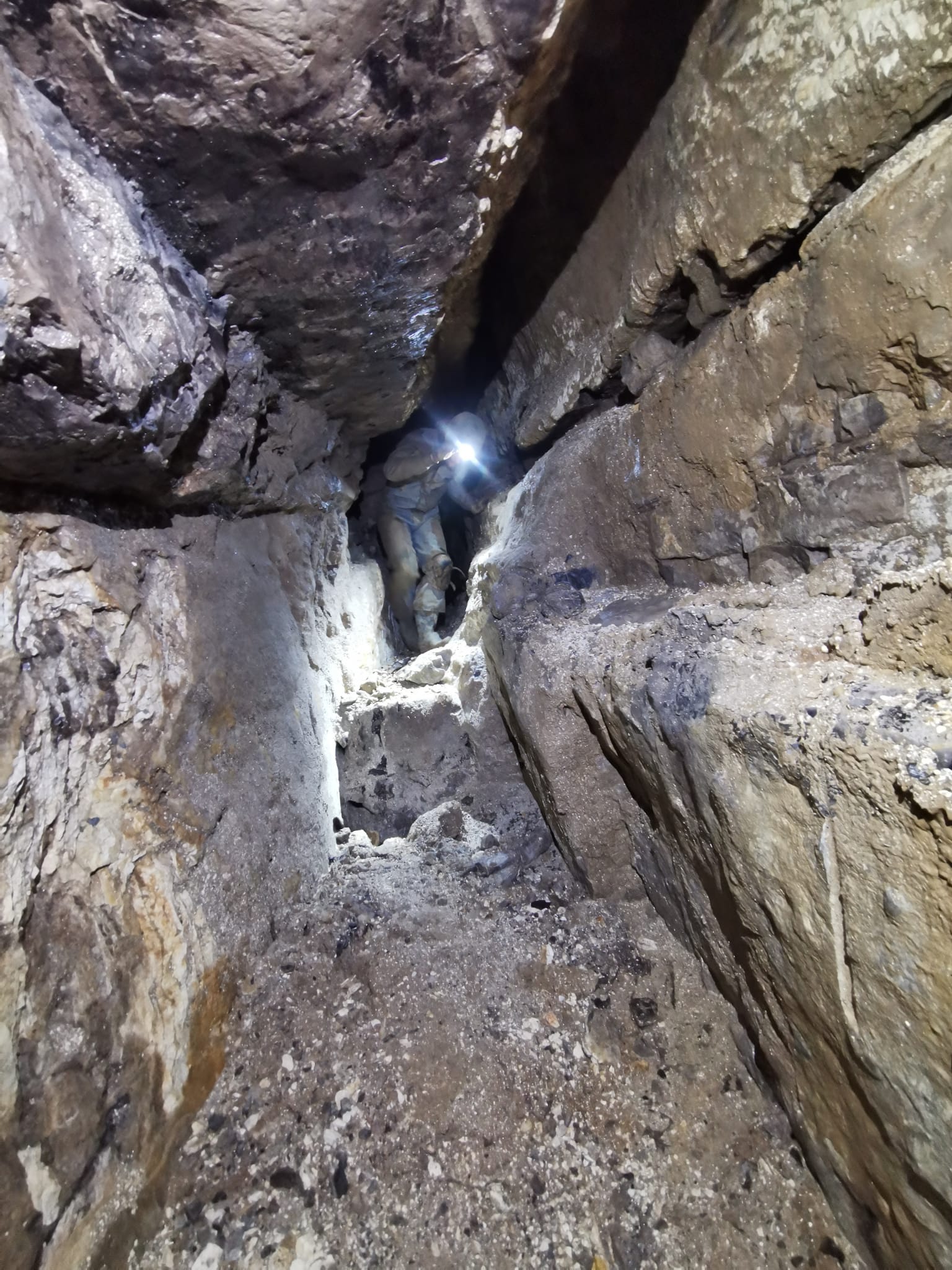 The Kitchen led to a further traverse at roof level, here the floor dropped away again but we were confident enough in our abilities and persisted forward to a section which seemed to mimic Rate Angle but bigger, obviously making it Nine Angle. The vein here turned at a 90 degree angle and headed off into a bedding only to step up beyond the blockage of miner’s deads which we were now staring at head on. We continued to traverse the bedding but it was becoming increasingly difficult as it was getting much wider. I rolled a large boulder down the pitch which was blocking my way and it bounced down the rift for 5…. 6…. 7…. Seconds… to which we both responded – “WTF!” Rob took out his phone to record a video and I grabbed another rock to demonstrate the drop below us. Again… 1… 2… 3… 4… 5… 6… 7… we counted as it rolled down the pitch we were perched over with no safety. Again – “WTF!” It was about now I realised how sketchy the position we were in and if one of us were to slip we would definitely die. My whole body froze from vertigo and after some massive faff and a quick look at the end I managed to turn around and make my way back towards Rob and away from the huge abyss. I felt safe back at the far end and now 9pm we decided to start surveying back out. 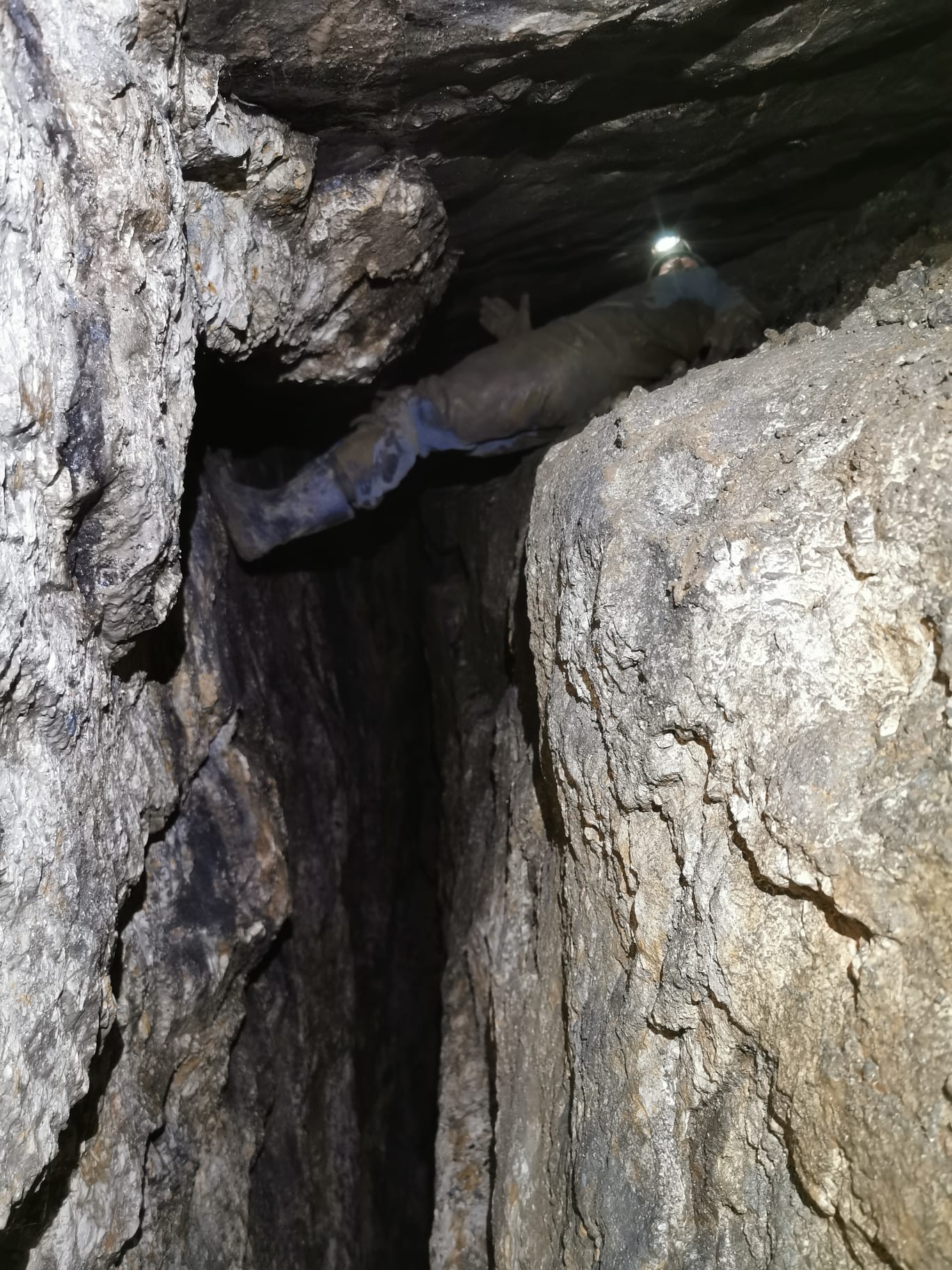 JonP chilling above the 55m drop at Nine Angle

We progressed quickly and soon made our way back to the top of Rate Angle. Last to traverse back over the pitch I jumped on the rope first as I was ready to go, I made my way about 2m below the knot when Rob shouted “BELOW!” I clenched my whole body and anticipated a rock fall, I relaxed and thought I was clear when all of a sudden WHACK!!! My vison went completely. I opened my eyes and looked down the pitch in a hazy grey fuzz. All I could hear was Rob asking if I was ok. My arms and legs felt like jelly and I started to communicate back to Rob. It felt like a few minutes had passed but in reality it was a few seconds. I had dislodged a head sized boulder from the traverse when I had passed over the pitch and it had only decided to fall when I was directly below it (or so Rob says…) It hit the left side of my helmet and rolled off to my right and down the pitch, we eventually found it on the floor of TAP traverse. I reassured Rob I was ok and told him what I had just experienced, I think mainly for my own benefit, giving me a few more moments to shake out my limbs before I started my descent to the floor.

I reached the floor and saw the offending boulder. I quickly got out of the way and shouted for Rob to come down. The whole situation wouldn’t be so bad if it wasn’t for the horrendous assault course we were just about to start (TAP Traverse). Rob followed me closely to make sure I was ok. This is the second time coming back along this section having bashed myself up in the place. It didn’t take us long to gain the entrance shaft and what felt like a harder prussic than usual got us to surface relatively quickly. We got to the cars and started to de-kit. Rob told me to check my helmet for damage. There were just a couple of small grooves where the boulder had scraped the top of my helmet. We sat in the back of my van supping on a couple of beers and marvelled at how worse it could’ve been. Goes to show how easy we take these dodgy, loose mines for granted.

Classic TAP trip in the books again, would’ve been 10 out of 10 if it weren’t for the rock. A solid 8, from what I remember.