In September 2010 the Eldon PC undertook their first major expedition to the Kelmend Province of Northern Albania.

A trip intended for two goals; to prove that there is significant cave development in the higher reaches of the Accursed Mountains, and to prove that the Eldon PC [made famous by their good looks and courteous nature] could undertake a successful expedition there.

Their information about this area was backed up by 2 small reconnaissance trips during the previous two years, lead by Martin (Barni) Barnicott with the intension to find a suitable area for the EPC to claim and develop. During these a number of new caves were discovered and partly explored, and also the cave Shpellë Vaso, which was found in 1995 by members of the Axbridge CG, was revisited [the Axbridge stopped working here in 1995 after numerous incidences occurred outlining the lawless nature of the area at that time].

During two weeks in September the 16 members scoured the unchartered upper slopes of the mountains in an attempt to find any caves. Well, they did for the first day, during which two caves were found that kept most of them busy for the remainder of the trip! 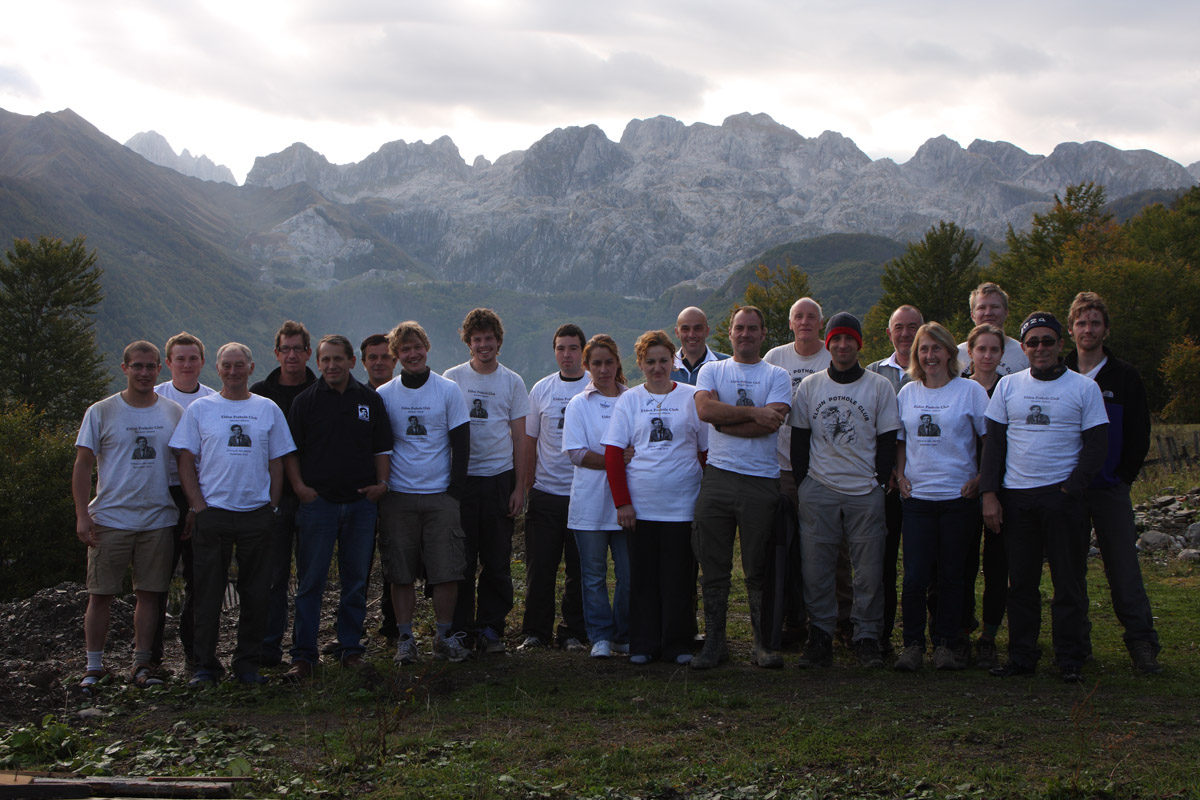 Found on the first day at an altitude of 1843m, this unlikely looking entrance could have been extremely easy/tempting to walk past. At only 1m across, and situated on top of an unusual 10x10m flat limestone plinth surrounded by deep, boulder filled rifts and gulleys, the only aspect of it that seemed optimistic was the continued echoes of dropped stones.

110m of tight-to-roomy entrance pitches, past a number of awkward restrictions and ice falls, surprisingly dropped into a horizontal streamway similar in style to Giant’s Crabwalk. This heads NW for 150m, passed numerous avens and under a few higher level phreatic sections, until the water sinks through an impenetrable crack and the way on is to traverse/squeeze horizontally through a tight rift section. Finally a route big enough to pass was found and the way on was followed for another 25m to the head of an impressive pitch (Victory Shaft).

Here the cave changes quite dramatically by doubling in size. The remainder of the gear allowed a decent of 20m to the first ledge, but still no floor could be seen, giving an overall depth of ~175m. It had been raining all day when this section was found and three large waterfalls filled the cavern with a deafening roar, evidence that these caves need to be treated with respect!

Considering it was found 20 minutes after Mençuri, only 150m away, this cave is surprisingly different! A 10m deep rift points down at a gap in the boulders at its base which emits a powerful, icy draft. A 26m freehang sets off the character of the cave, which is almost totally vertical in nature throughout. The development is on a significant North-South fault which is very slightly tilted from vertical. This forms the "roof" of the cave as the seven pitches plummet down below it to a depth of 96m. Stones knocked at the surface rattle all the way down so it#s not a clever place to hang about!

Here a boulder filled floor is met with only a very small rift feature heading off. As this did not draft an alternative route was sought for. This was found in the form of a slight widening of the rift opposite the top of the previous pitch. Once bolted up to the icy gale was again met and enthusiasm rekindled.

A short shuffle through the keyhole shaped passage joins yet more shafts down. After a further 60m of steady descent the largest shaft so far is met. Big Ben Shaft, which is a +120m big feature met 80m from the floor, not only shows the impressive scale of the cave but also marks the points at which the cave changes character.

At the base of the wet shaft the water shoots down an aqueous route through the boulders, but luckily a series of dry chambers and short pitches bypasses this section, meeting a small inlet passage that rejoins the main water 20m below Big Ben.

It was at this point (-253m) that the last pushing trip started off from, with the figure of -365m in mind as the current deepest cave in Albania, just over in a neighboring valley. The team of two dropped 7 further pitches, each of 10-20m in length, now heading North with a typical "Yorkshire Pot" feel about it. The water volume was now enough to necessitate careful rigging, especially with the unrelenting freezing draft.

After 5 hours pushing and surveying, the gear resources had tired only slightly before the energy of the two explorers, explaining why the last two pitches were rigged from dubious naturals. Sat above the next 20m pitch, they added up the survey legs in their heads, wandering if this was now the deepest cave in Albania. The figures looked good so they headed out, derigging half the cave on the way.

Once finally back at the hotel the rescue was quickly called off and the survey data uploaded. 380m vertical extent, the deepest cave in Albania in one expedition! The party commenced and euphoria remained high, until the day we all returned to civilization when a quick internet check corrected us of the deepest in Albania being BB-30, explored by the Bulgarians to -610m!

While the above two caves were being explored, a surface party led by the Noble Crew worked the nearby area, looking for more entrances. Only 140m away they found their prize. A 10m deep, dry river canyon cuts down the hillside to disappear underground. A short meander along leads quickly to the top of a 19m pitch, and they noticed a strong draft issuing from below.

Over the next couple days they dropped this pitch and a further three to rejoin the vadose meander, which dropped down a few climbs to a section where it got quite tight. However a black hole could be seen beyond so it was pushed through to gain access to what is now called Big Nose Pitch, after Mark’s unfortunate encounter with the wall whilst turning his head! The only rope remaining was a 50m length, which left James hanging on the knot, so the previous pitch rope was cut shorter and lowered down to get to the floor of a sizeable chamber ~15m long. The meander could be seen to continue to the West but a 10m drop stopped the way on. Even in this sized passage the draft was noticeable, a very good lead for next year, again currently heading away from the other two caves.

A few other caves were explored by the team while out there. Shpellë Pitkini, first found in 2009, was previously blocked with ice at -50m. On a return visit this year the draft had opened up a route underneath the ice to gain access, after a small amount of digging, into the continuation of the large cave. A short climb down dropped into a chamber 15m across which contained a superb ice lake, great fun for a slide about on!

No ways on were found but on the return a side passage off the climb was noticed which led up through boulders into a steeply sloping down passage. The snow floor and ice roof made for an exciting 10m long slide down into a small chamber. At the bottom a mighty draft fired out of a tiny rift, which was courageously pushed by a certain experienced member until they were firmly stuck, requiring a fair amount of assistance to become detached from the opening.

The other cave in which exploration was continued was Shpellë Vaso. For this the Eldon were joined by Roger from the Axbridge, as he was on the original exploration trips 15 years previous, plus a further trip in 2008. The known end of this cave was at -150m in a dry, high level series of chambers and rifts. Roger boldly made a climb up into a passage in the roof which bypassed the blockage below and lead quickly, via some typically uninspiring mud formations, to a superb 50m pitch down. A series of tight rifts lead off from here and the water can be heard below, a good lead for next year…

3 new caves, one of which almost 400m deep, all over an hours’ walk from the nearest road, this was an incredibly successful "first" expedition for the EPC to the area.