I met Luke in the usual layby at 6pm ready for an early start on tonight’s push. Luke had already collected the drill, bolts and more rope from Rob’s and after kitting up we descended around 6:15pm. We made a quick descent and soon arrived at The High Road, Rob was descending an hour later armed with his smaller drill and plans of bolting a traverse line from The Tool Room to The high Road and then to re-rig The High Road,  thus eliminating all faff  – ok not all!

We soon found ourselves stood at the base of tonight’s ‘push’ (the climb at the end of the pipe workings). I climbed up the loose slope to a solid back wall and placed a bolt for protection then gingerly walked over more looseness to where a vertical stacked wall towered over me. I placed a high bolt and rigged it as a traverse so Luke could clip in to something ready  to spot me. I removed all offending articles and started a wide bridge. The stacking wasn’t that high and the plan was to boulder it on my stop with a load of slack to the last bolt. Once I was safe Luke could pass me the drill and I could bolt it from the top. After a lot of help from Luke I found myself clinging on to the sturdiest looking boulder and stood atop the stacking.
“SAFE” I shouted down to Luke and with fingers crossed turned around to a blank wall! The level was completely blind – buggery! Rather than place a bolt up here I down climbed the wall with help from Luke who guided my feet. I was soon clipped back to the traverse. We de-rigged this part and Luke headed up to the short level which I had looked at last week. He placed a bolt and rigged it as a pitch ready for Rob to come and survey later on.

Absolutely gutted we headed back down to the pitch after a little re-rigging we ducked under for Luke to check out the other side of the Wall below The High Road. Rob was above us at this point and after telling him that we’d ‘killed it’ he told us to check out the small shaft just in front of us. This is the 3m climber which we looked down last week, we had the drill with us and it needed ticking off. I lowered myself into the shaft just to check out the ginging, it seemed bomber and gingerly down climbed it and low and behold I found myself looking through a window at floor level leading into further workings.

I shouted up to the others that it went and climbed through the eye-hole which landed me on a large pile of stacking. The chamber floor was covered in silt which had obviously come from below the wall. On the floor lay 2 large timbers the length of the chamber, which I couldn’t work out if were part of a railway or just very large stemples? Straight in front was a neatly stacked pile of deads whilst to my left a rubble slope led up to the chambers roof. On the floor of the chamber in front of the neat stacking was a half sunk mug, it wasn’t until I sat down to examine where I dropped into the chamber when I noticed a glass bottle stored away in the stacking complete with a cork in the top. I shouted up to Luke who placed a bolt so we could avoid the ginging on the way out but before he joined me we made a crystal clear vocal connection with the slope and the funnel of boulders at the bottom of the pitch. We both had a good gander and speculated what this place was and what purpose it served… still none the wiser, it just seemed like a bunker to me. 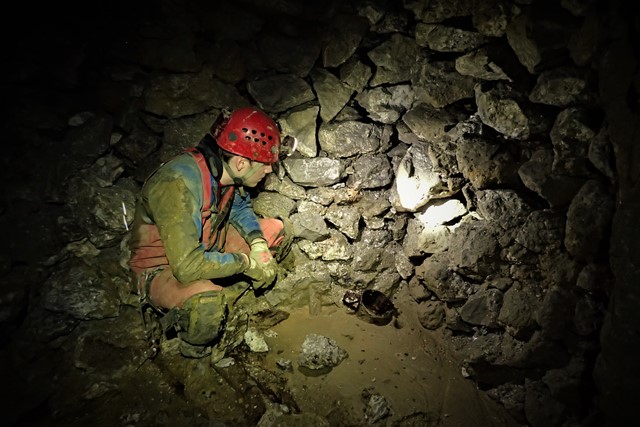 Luke checking out the sinking mug 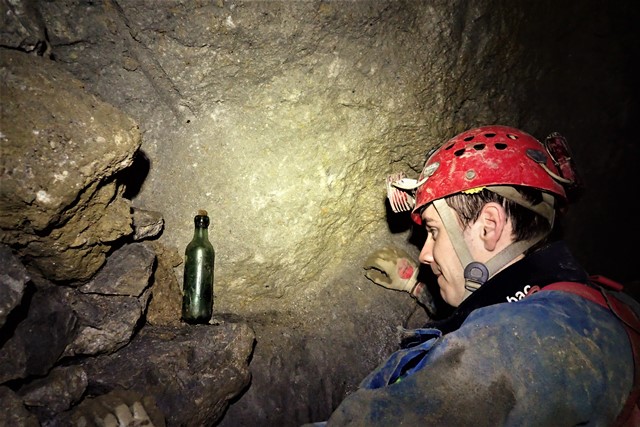 Luke inspected further up the slope keeping calm with its unsafe nature, I went for a second look and nearly died! Luke saved me again by guiding my feet back down trying not to bring the world down with me. Once back up and up the pitch we met Rob who had done a cracking job with both traverse lines and with time on our hands whilst Rob went to survey the top level at the end of the pipe working Luke and I started the bolt climb above The Tool Room. I got to a point not far off the slope we have been looking at these past few weeks whilst Luke checked out The Tool Room before it was time to leave and after a few minutes of faff we abseiled from the top avoiding the loose slope but still landing us in the slop at the bottom.

We surfaced at 10:40pm to a moon lit quarry and manage to scrape a pint before the Christmas break.